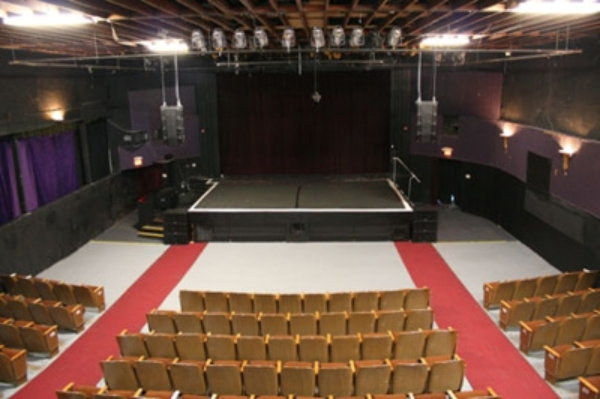 The Astor Theatre was built in 1945 in an area of north Charlotte that had three textile mills. The Astor Theatre opened on March 1, 1948 with Gary Cooper in “The Plainsman”. It was operated as an African-American theatre. In the 1960’s the area was in extreme decline, and the Astor Theatre showed X-rated movies, becoming the Astor Art Theatre on May 1, 1964 with “Her Bikini Never Got Wet” & “Adam and Six Eves”. A topless bar was next door and prostitutes often worked the street. The theatre closed and a church took over the building, then it closed.

Duing the 1990’s art galleries began to locate in this area. The Astor Theatre was restored as the Neighborhood Theatre, a perfoming arts venue which has features such musicians as Livingston Taylor, the Nitty Gritty Dirt Band, and Ralph Stanley.

The area, known as the ‘arts district’ or NoDa (for it’s location on North Davidson Avenue) has undergone an amazing transformation, with restaurants, gallaries, condos, and restored mill houses serving as residences and shops.

The Neighborhood Theatre is now a wonderful funky shade of purple with cream colored ceramic tile around the lower level. A new exterior ticket booth has been build. I remember how seedy this neighborhood, and particularly the Astor Theater (now the Neighborhood Theatre), was in the 1960s. I was recently told that a brothel operated upstairs. The newspaper adds for the Astor during the 1960s called it “The Carolina’s Most Unusual Theater”. The Astor and the Fox Drive-In were the two X-rated theaters I remember advertising in the newspaper. Of all the wonderful movie theaters that Charlotte has lost, how ironic that it’s most notorious and seedy movie house is resurrected at a great performance space.

Recently while traveling in the NoDa section of Charlotte along North Davidson I spotted a theatre that appeared to still be a theatre, but not sure so can anyone give me additional information? I don’t recall the name of the street where the theatre was located in that area as I didn’t go around the block to get a second look and should have, but will return soon.

The Film Daily Yearbook, 1950 gives a seating capacity for the Astor Theatre as 446.

In early 1960, my dad operated the Astor theater for a short while. He showed mostly “B” movies, not porn or anything like that. I could tell that it had once been elegant, with it’s carved ceiling and red velvet curtain to draw over the screen. Next door was a business that made and sold french fried potatoes for resturants. An apartment was upstairs over the business where some people lived. The neighborhood was pretty run down, and my dad did not operate the theater very long. But he did have Bill Monroe and his bluegrass band play there once. My dad also operated a drive-in theater in South Carolina and had Bill Monroe and Carl Story play there.

Hi, our neighborhood history group is trying to research the old Astor Theater. If anyone has any old stories or photos they would like to share we would love to capture them. My contact information is waymere at Yahoo.com. Thanks for any help.

I am working on a project on “Lost” Charlotte Movie Theaters for UNC-Charlotte where i am a faculty member. Would love to get in touch with anyone who as insight into this theater (stories, pics, whatever). You can send me an email at and hopefully we can talk about your interest or info on the lost theaters of Charlotte. – Thanks

“CHARLOTTE, N. C, has a new theater. It’s the Astor, converted from a store building, and operated by the Colonial Theaters Corp. of Valdese, N. C. Modernized, in every respect, the house seats 446.”

The 1950 FDY listed the Astor Theatre in both their “Negro Theaters” section and the main theaters listing for Charlotte. 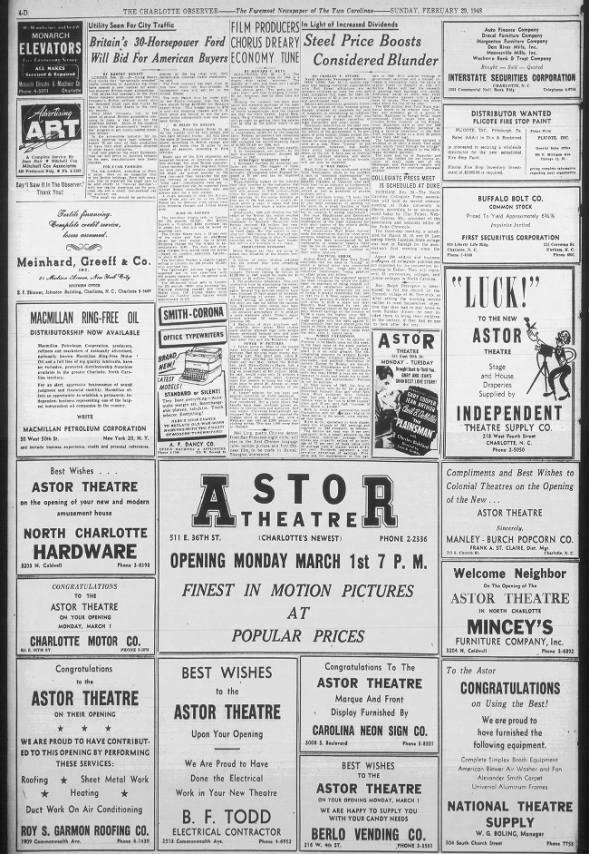