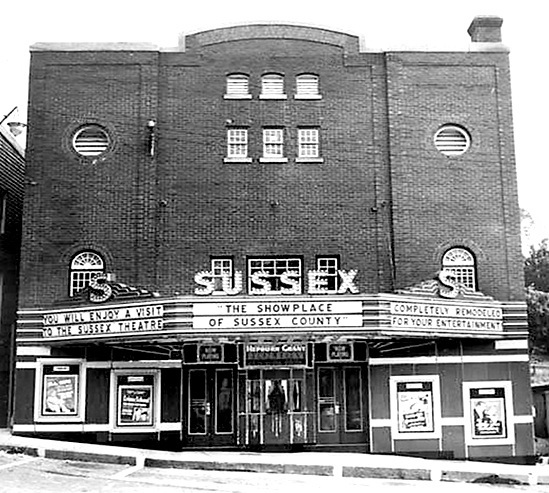 Designed by Paterson, NJ architect Flavio P. Grosso, the Crescent Theatre, also once known as the Sussex, opened in 1917 and operated as a single-screen movie theater until 1976. The vernacular Beaux Arts building now operates as a playhouse.

Those are all right. I found this theater earlier today while biking through. I told the head lady about CinemaTreasures.org and asked if i could have a tour. She obliged and was very helpful. The above website has a great history about the theatre.

The auditorim is completely gutted when it was a community/senior center and is still vacant. The projection booth is her office. The balcony holds 99-seats and those are the original seats left intact, they are red leather. There are some pilasters on the walls and you can see the original vaudeville wallpaper that was unearthed and still under the plaster. What used to be where the audience saw down to the stage is now a floor so it’s another theater in the balcony. The proscenium juts 5 feet above the (now) floor, (that’s a big proscenium). I was taken backstage to see all the elevators that don’t work. She took me up the stairs to the flyspace, where she said they found lots of pulleys and stuff. The town had erected the staircase back in the 80s and this theater was the first air-conditioned building in Sussex County. There once was a marquee, but no more.

After a time out of the spotlight, the 86-year-old Crescent Theater will be raising its curtains again tonight in Sussex.

The theater is presenting “To Kill a Mockingbird,” the first play to be performed there in years. Staff from the Tri-State Actors Theater and volunteers have worked for months to refurbish the dusty, empty theater.

The theater opened in 1917 and featured silent movies and vaudeville acts. It shut its doors in 1976 and then underwent a renovation in 1986.

The building was then used as a community center, but it was closed in 2001 because of water damage.

Local officials hope to land the building on a historical register.

“To Kill A Mockingbird” is an adaptation of Harper Lee’s Pulitzer Prize-winning novel about childhood memories and life in a small Alabama town in 1935.

Here is some information about the theater:
http://www.njskylands.com/cltheattristate.htm