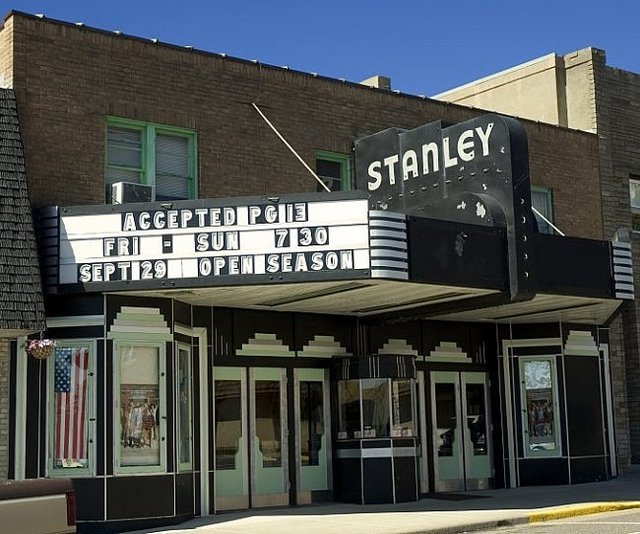 Built on the site of the Star Theater in 1936, the Stanley Theater opened on July 3, 1936 with Margaret Sullivan in “The Moon’s Our Home”. This is a small town theater located at North Broadway and East 4th Street.

An article about the theater and the restoration of its original Vitrolite exterior: View link

At a time when itâ€™s hard to keep a small town theater open, the Eslinger family is bringing back the golden age at the Stanley Theater.

The 500-seat movie theater, a landmark on Broadway Street, is undergoing a facelift â€" not to make it look more modern, but to take it back to the theaterâ€™s roots in the mid-1930s.

The theater now has pretty much the same exterior appearance it did back in its heyday.

â€œIt was built in 1936 by Heywood Amusement out of New Richmond, which had a circuit of theaters at the time,â€ said Daniel â€œMussyâ€ Eslinger, who, with his wife Cecelia, bought the theater in 1968.

The theater is on the site of the old Star Theater, which dates back to the silent era around 1912-13. Heywood bought it in 1927 or 1928, with plans to build a new theater. The Great Depression put off plans until 1936.

The exterior was covered with what was known as Vitrolite or Carrara glass, an opaque structural glass used in architecture, according to Tim Dunn of Vitrolite Specialists of St. Louis, who is doing the exterior work at the theater.

The glass, which was ground to a mirror finish, was extremely popular at the time. It came in 32 colors, and Stanley Theater used a few of them, mostly black, with green and white for trim and decoration.

It also had the classic ticket booth jutting out from the entrance doors onto the street, the frames for posters of coming attractions, and the big lighted marquee displaying that weekâ€™s featured picture.

The building was solidly built, out of brick and concrete block.

According to the Stanley Theaterâ€™s website, the theater was advertised at the time as the â€œfanciest placeâ€ between Milwaukee and the Twin Cities.

It is that look, with the Vitrolite glass, that Eslinger is bringing back with the current project. Itâ€™s not easy, since production of that kind of glass ceased around 1950, according to Dunn.

His business is to find the glass as old buildings are torn down around the country, retrieve the glass, and install it in restoration or other projects like the one at Stanley Theater. He is the tops in the field, worldwide, if you want Vitrolite glass.

â€œThey made millions of square feet,â€ Dunn said of the manufacturers of the glass. â€œWeâ€™re just moving it from one building to another. We travel the country, taking it off, and putting it on.â€

Eslinger figures the Vitrolite disappeared from the Stanley Theater sometime in the 1950s, likely due to the tendency for careless â€" dare we say, inebriated? â€" drivers to leave Broadway Street and crash into the structure.

That all happened before the Eslingers took over, of course.

When they bought the theater, it was still at a time when theaters could still be found in small towns across the Midwest, though they had seen hard times.

â€œI think what broke some of the original ones was the advent of TV in the 1950s,â€ Eslinger said.

But in his own day, Eslinger had to deal with the rise of the use of VCRs and subsequent technology, and improved transportation systems which made it easier for locals to get over to Eau Claire and Chippewa Falls to the multi-plex movie houses.

â€œIt has been tough at times,â€ he said. â€œYou run into the changes of the way things happen.â€

The toughest time of all was a few years ago, when Broadway Street was torn up for a total rebuild. The theater was closed during the project.

â€œThat damn near broke us. It took two years to come back from that,â€ Eslinger said.

A few years ago, Mussy and Cecelia sold the theater to their children, Louis, Theodore, Gloria and Theresa. Louis, the chief of police in Cadott and Boyd, is the chairman of the board.

Mussy is 84 now and Cecelia 69, but they still do most of the work, with the help of their children and some local volunteers.

The front of the theater is not the only restoration. Some details in the lobby match the look of the old days.

And the wall paintings inside the theater itself are restored original works.

Eslinger said the original design on the side walls was painted by a local artist named Bert Robertson, but it was covered up over the years. About eight years ago â€œthe ghost of Bert Robertson,â€ as Eslinger puts it, brought his work back from the dead. It started to re-emerge.

Old paint was stripped away and Eslingerâ€™s daughter Theresa traced the design out and repainted it.

It seems the Stanley Theater has a history that cannot be denied.