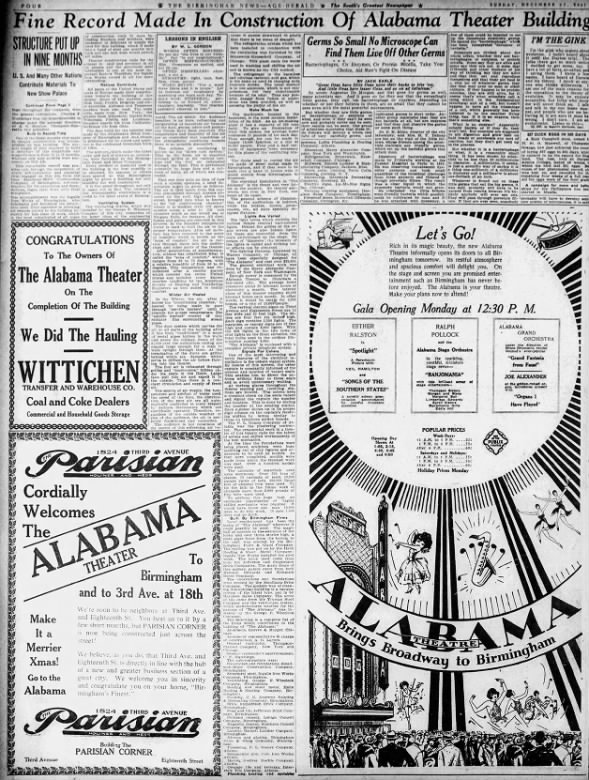 The Alabama theatre opened on December 26th, 1927. Opening article below: 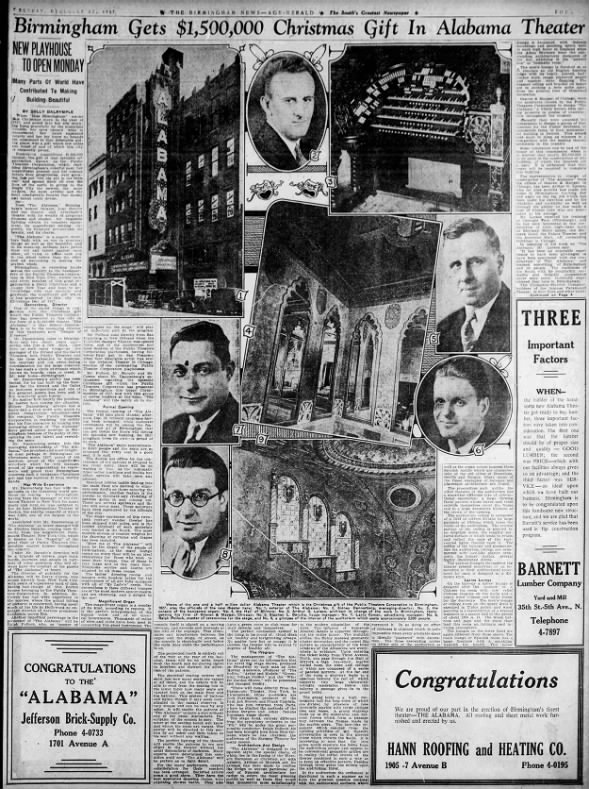 The Birmingham Rewound link has changed, this should work for now.

Lots of info and photos on the Alabama and other Bham theatres. Seems like the Melba was demolished.

Cecil Whitmire, a former organist at this theater and the man credited with leading the efforts to get it restored, passed away recently; story here: View link

Here is an architectural sketch:
http://tinyurl.com/lkmqnd

On July 18th, accompanied by two assistants, I had the opportunity extensively photograph the Alabama and Lyric Theater (across the street). The photos were taken to compare and contrast the condition of the two theaters and includes a number of wide angle, long exposure images that bring out the detail and vivid color on the inside of both grand old theaters. I’ll post links here to the site the images will be uploaded to. Over 400 photos were taken between the two sites, including backstage, below the stage, storage and mechanical areas, balconies and more. It’s taking a bit to sort out.

Wasn’t this theatre part of the Civil Rights Movement since the Alabama at the time was segregated at the time Birmingham was catching hell during the 1950’s and early 1960’s.

Indeed I too enjoy viewing these marvelous photographs. Your contributions are very much appreciated Lost Memory. Do not be discouraged by the verbal assault of one disgruntled person. When an individual resorts to name calling that person has already admitted defeat.

What a stunning theatre! I am so glad it was restored and will be seen by many generations to come.

Lost Memory, I really appreciate all the wonderful photos you post. Thank you!

Start Date: 6/7/2009 2:00:00 PM
Details
Tours will include the new Hill Arts Center Banquet Hall, the new Hill Center Meeting Room still under construction and tours of the Alabama and Lyric Theatres. Walk on the Lyric stage and walk back in history where the greats of Vaudeville walked.
You will hear music from the Mighty Wurlitzer pipe organ all afternoon played by members of the theatre organ staff. Our organ crew chief Larry Donaldson will be on hand to answer questions and let you peek into the secret organ chambers to see how it all works. Our Technical Director Jeff Kizziah will be in the projection booth to let you see how the picture gets on the screen. Volunteers will be stationed throughout the theatre to answer questions.

Refreshments will be in the Alabama Theatre and Hill Center. Holly Burrow of the Hill Center will be available to answer questions and provide literature about the new center.

The Melba is not listed on CT, but it is listed on Cinema Tour with no information other than it is supposedly “closed” so hopefully it hasn’t been demolished.

Can anyone tell me whether the Melba Theatre in Birmingham still exists today as I have read that it is “closed” on Cinema Tour and elsewhere that it was demolished? It premiered the movie, To Kill A Mockingbird with Scout (Mary Badlam) and Jem (Philip Alford) as they were both Birmingham residents at the time the movie was filmed in Los Angeles CA.

I moved from Birmingham in 2007. I grew up in the 60’s and 70’s going to the Alabama, Empire, Melba and Ritz. I saw many animated Disney movies at the Alabama. And I saw the original DR. DOOLITTLE there. Sitting near the front, the giant pink snail nearly blinded me with the brightness. I also saw the first HERBIE THE LOVE BUG movie there as a kid and they had the HERBIE CAR OUTSIDE when we came out. The last first run I saw there was the 70’s remake of King Kong…. what a waste of grand theater usage. When I was in High School in early 1980’s it was the site for the Cult Classic Rocky Horror Picture Show… every weekend it seemed.

My mother was a product of the Depression and WWII. She went to the Mickey Mouse Club at the Alabama every Saturday, and she has told me that the high back balcony of the Alabama was used by the Black community before desegregation.
Now living near Knoxville, the Tennessee (last surviving sister of the Alabama is still functional in much the same way as the Alabama is today) is used for classic festivals, live entertainment, etc.

The Lyric is just a legend to me. It was gone before I was born.

By the 1970’s the other downtown theaters were basicly B run theaters… showing Chinese KungFu movies, Blacksploitation films, etc; along with occasional classic re- releases. There were the African American theaters like the Carver… that are still used as African American Cultural Centers

There was an ABC theater in Roebuck Shopping Center. It was also originally a widescreen theater. It also showed alot of First run Disney movies. It was converted to a church in the 1980’s. I am not sure what is in the site now. Several twin and quad theaters came and went throughout the city between 1970 and 2000…not worth noting too much… they were pretty cookie cutter.

And the Eastwood Mall Theater… built in the mid 1960’s was originally a cinemascope venue and had super plush rocking chair seats. It converted to a twin (think proto-multiplex) somewhere around 1980. The last fullscreen show I saw there was Raiders of the Lost Ark. It closed a few years ago and was demolished along with Eastwood Mall and replaced with a Walmart in 2006 or 07. The Eastwood was not particularly elegant in any form or fashion, but it was unique in that it was one of the first IN-mall theaters in the country, and it was NOT A twin or multiplex. A similar theater was built in Jackson, Tennessee at the Old Hickory Mall a few years later.

I moved away from home about 4 years ago and have missed the Alabama Theatre ever since. I am also I movie theatre junkie and a horror film buff as well. I decided to get a tattoo to honor my home, my home’s theatre and my favorite horror film of all time Night Of The Living Dead. When I did a promotion with Weinstein Co for Diary of the Dead this Feb. I finally showed George Romero the tattoo, he just humbly shook his head and smiled. He and Bill Hinzman from NOTLD said that they had been to the theater with a film in one of the many great film festivals Birmingham has. Here’s to the Alabama. Here is a picture of the tattoo. View link

Those are obviously pre-restoration photos. The place looks like it was a time capsule, with the exception of some dirt on the walls.

Quite a photo collection. Thank you for sharing.