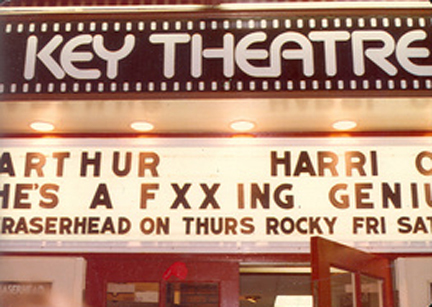 The Key Theatre (named for Francis Scott Key), located on Wisconsin Avenue near M Street, opened on April 9, 1969 and for almost 30 years was one of the most popular independent art houses in Georgetown. The Key Theatre closed in December 1997 and the building now houses a furniture store.

Further information about this theater would be appreciated…

I worked there in 1988. Some of the movies out about that time were Babettes Feast and Tampopo.. just LOVED working there!! Rabi, Alex, Trent, where are you guys!!! When the manager hired me, he told me to show up the next day.. I did and as we started to work, I asked “do you want to know my name now?”.. it was so easy and laid back!! We watched fireworks from the roof (interesting climb to get up there!!) and we watched a “private viewing” of a film that one of the guys there made in his film class. A few of our group was in the film too, it was hilarious. I Mickey Spillane based film, but with bad acting. SO much fun!!

In 1974 I and a date warmed up in the Snuggery at Martin’s Carriage House, then went to the Key to watch Mel Brook’s “The Critic” (see it on YouTube), followed by Lenny Bruce Performance Film (that is Lenny Bruce performing, not the Dustin Hoffman film “Lenny” that was in theaters at the same time. I’m a little older and I might not laugh as much as I did at the time, but I do love the memory.

The entry for architect Louis Henry Layton III in the 1970 directory of the AIA lists the Key Theatre in Washington, DC, as one of his works.

I would like to respond to all of you but that would become a thesis. I’m Eddie Dornack & I was the guy who ran the Key fron 1972 until it closed. I staged the funeral & designed the entire upstairs. Rabi, Alex & Trent were great friends & employees as were Zalman, Mimi, Misty, Baron & god forbid Mark. I’ll be glad to answer any questions. I would love to hear from Cushing 1961 & Randytheicon. Yes the barbecues on the roof were great but the ladder & the tar were a problem. E.

The KEY THEATER basically opened in 1969 as a single screener and later on was split into two sections and somewhere during the late-1970’s/early-1980’s when from 2 tO 4 screens showing first-run independent features, documentaries and foreign films.

my fond memory of the Key theater was a Sunday morning pre-release screening of ‘The Crying Game’ (Key Sunday Cinema Club) – someone accidentally dropped their coffee on my back … and the movie itself was great.

The Key never was a double. It opened with the original single-aisle screen, and then the three smaller upstairs screens were added in 1985.

In the mid-1980s there was a movie-themed gift shop next to the main entrance. Bought a few posters there…and proceeded to lose one of them that night at the Cerberus.

I saw more than a few movies at the Key. The one I remember most was Cronos, from Del Toro. Brilliant film. Icing on the DC memory cake: I won two tickets to the show by correctly answering three movie related trivia questions at the original 9:30 Club. They were posted on a Xerox in the Back Bar. I don’t remember the questions but I do remember that Russ Meyer was the answer to one of them! Good times.

I believe it was summer of 1978 or 79 when Jimm Altman’s band Scandals played a show at the Key Theater. Was anyone else here in attendance?