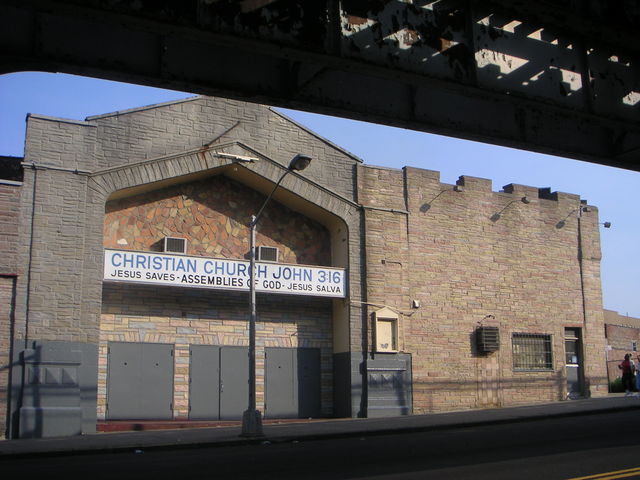 The Empire Theatre opened around 1894, with 1,660 seats. It stood on Westchester Avenue at 161st Street. Starting about 1940, the Empire Theatre became one of the first Spanish-language movie houses in the Bronx.

The Empire Theatre has long served as a church.

Listed in the 1943 edition of Film Daily Yearbook as being operated by RKO Theaters. It has gone from listings by 1950. From February 1954 a C.O. was issued for use as a church.

Thanks Warren…Well we all know that the F.D.Y. can be a little tardy and sloppy with its listings at times.

Used to live on Stebbins ave & 163rd… We used to go to that church in the summertime for free lunches in the 70’s.. A school is right on the corner..

My grandfather, Sydney S. Cohen, ran the Empire Theater for a number of years, including 1915. The theater letter head stationery from that time includes, “Operated and controlled by the Sydco Photoplay Corporation, 331 Madison Avenue”, which was one of Sydney’s companies. In a letter to his wife, Bertie, mailed on April 6, 1915, he notes “Another big night at Bronx $184.95 = Tuesday”

I would be very interested in hearing from you if you have more information about the Empire Theater around 1915.

The building is not demolished. I believe it is still used as a church.

Thanks, JM3522. I appreciate your letting me know.