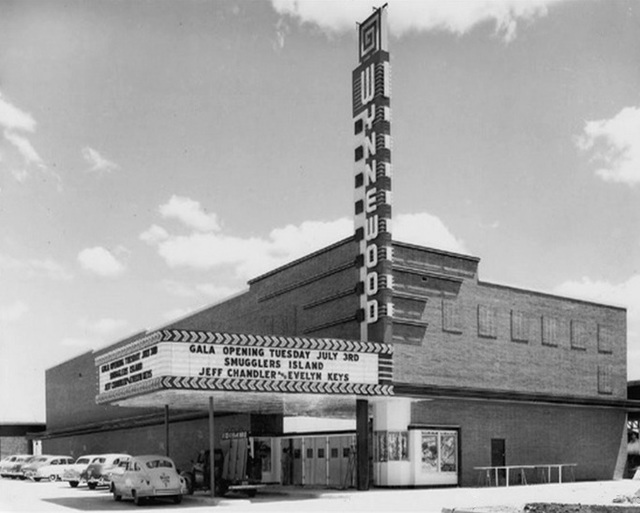 The Wynnewood Theatre was opened on July 3, 1951 with Jeff Chandler in “Smuggler’s Island”. It was closed on September 28, 1983. The building was boarded up with the sign and marquee long gone, the Wynnewood Theatre was demolished around 2000. It was situated with a corner box office, towering vertical sign with individual letters spelling out “Wynnewood” and a cool marquee extending out from the building that you drive under and let people out.

I finally found the architects of the Wynnewood. The June 7, 1952, issue of Boxoffice attributes the design of the house to the firm of Pettigrew & Worley.

One summer while attending Champion Pre-School, we went on a “field trip” to the Wynnewood. We saw Gidget Goes Hawaiian (1961). It will forever be my favorite Gidget film, partly because of the movie going memory. Several years later I went to the Wynnewood with the preacher’s kid. We saw Mary Poppins. I seem to recall they always played a short film of the national anthem along with a film clip which ended something like “and remember to attend church this Sunday at the church of your choice”. Yes, I grew up in Oak Cliff and I remember birthday cakes from Jan’s Bakery and movies at the Wynnewood Theater. Times have changed.

Mark W: Your brother John trained me as a projectionist here in 1971. I fondly remember your Dad Rueben—didn’t he work the Texas Theatre with Bill Phillips?

James B,
Yes. My dad Reuben primarily worked at the Hampton Rd. Drive In, but also worked two days a week at the Texas Theater. He was there when they arrested Oswald.
John passed away in 1992 and my dad died in 1984.

Lynne, I think you’re right. I grew up in Oak Cliff in the early 70’s and remember going to Wynnewood to shop, eat and see movies a lot. Thanks for posting this pic.

The only interior view of the Wynnewood Theatre I’ve been able to find is a small shot of the concession stand on this page of Boxoffice, June 7, 1952.

The Wynnewood Theater opened July 1, 1951 as part of the Robb & Rowley Circuit. It basically was in the same chain for 32 years. The theater was retrofitted several times. The first was 1953 for panoramic showings of widescreen films. The next was 1958 with a Todd-AO system. Todd-AO was removed in 1961 for Cinemiracle presentation(s). The theater was twinned in April 1973. It closed Sept. 28, 1983, reopened for a period of time as an adult theater, sold to a developer but was demolished in 1999. Its address was 275 Wynnewood Village.

The Wynnewood got its name from Six Flags founder Angus Wynne who created the $7 million Wynnewood Village Shopping Center in which the theater was housed. Robb & Rowley would get a corner spot when the center was created with 10,200 sq. ft. theater plans by Pettigrew and Worley. Unlike many suburbans of the period, the Wynnewood was budgeted at north of $250,000, 1,400 seats, and had 400 targeted parking spots of the 2,000 available in the center.

On July 1, 1951, the slightly toned-down 1,000 seat Wynnewood Theater opened with “Smuggler’s Island” with a ten-seat soundproof cryroom, retractor seats and managed by Pat Murphree formerly of the Heights Theater to manage the facility for Rowley United Theaters. The Pettirgrew, Worley & Company architected theater’s final look didn’t quite match the highly stylized look of the original concept drawings. However, it did match the DeWitt and Swank design of the overall Wynnewood Shopping Center in which it was housed. The two firms did work together on the final design for the theater.

The R&R Circuit was focused on Oak Cliff with 7 theaters and this was clearly its jewel. Just two years into its run, the Wynnewood was retrofitted with a panoramic screen on Sept. 24, 1953 which reduced the house to 944 seats. An even more ambitious project happened in March 1958. Rowley United (having bought out the Robb family in 1955) spent $100,000 dollars on a Todd-AO system to show “South Pacific.” A six-track sound system, a 22x44 screen was brought in new 70mm projector, and eight surround speakers on the wall making it easily the most technologically challenging show for the suburban. Many Hollywood stars and producers flew in for the event. On the premiere’s night, a $25 after-party featuring Carmen Cavallaro saw stars such as Linda Darnell, Margaret O’Brien, Don Murray, and Rocky Marciano among others. All theater seats were reupholstered for the premiere and road show engagement, an improved box office, and redecoration all took place. In an incredible 32-week run 130,000 went to this Oak Cliff theater to the “South Pacific” in Todd A-0. South Pacific would return for a non-AO run in 1971.

Rowley then installed a costly Cinemiracle system in early 1961 in time for the showing of “Windjammer.” Todd-AO was removed. Three projectors operated with four projectionists allowed the wall to wall screen of the now 800 seat theater. Five speakers behind the screen and one on each side of the house. Only Houson’s Rivoli and the Wynnewood were said to play this in Texas.

Innovation pretty much stopped there as Hollywood steered away from such technology and undoubtedly “Windjammer” didn’t make back its investment. Rowley United positioned the Wynnewood of the 1960s as a family friendly house. In a single year, the Wynnewood had 50 weeks of G rated fare in 1968 with 22 weeks with Disney product. Rowley United became United Artists after a stock transfer and decided to twin both the Cine and the Wynnewood. The Wynnewood was halved with 400 seats in each house, had new screens installed, and was closed for two months in March and April of 1973.

In the 1980s, audiences were moving toward the multiplexes and Oak Cliff had the Redbird Cinemas which were doing decent business siphoning business away from the Wynnewood. In the summer of 1983, the Wynnewood became a dollar house and closed quietly with second-runs of “The Twilight Zone” and splitting “The Verdict” and “Star Chamber” on Sept. 28, 1983. The move came at the same time UA was breaking ground for an 8-screen house across the street from the Redbird Mall several miles south of the Wynnewood. A 32-year run for the R&R/UA circuit was pretty good. UA’s presence continued with the South opening May 23, 1984.

UA either subleased or operated under its art/adult nameplate with the Wynnewood re-opening trying adult fare for a brief period and playing Caligula in May of 1984. Jerry Moore Investments purchased the Wynnewood Theatre in Oak Cliff from United Artists in 1992. The Houston-based mall developer probably had grand plans and rumors abounded that a multiplex would rise in the Wynnewood and the Ward’s store when it went out of business. That never happened. The Wynnewood theater almost looked it was hoping that it would be bulldozed after sitting vacant for years. That day would come when it was excised from the shopping center in May of 1999 though would stand just a little bit longer than the UA presence in Oak Cliff which shuttered the UA South 8 in October 1998.

I saw Ben Hur on the giant Wynnewood screen. This was sometime in 1960, and already they were touting the opening of Windjammer in “Cinemiracle.” Ben Hur had previously played as a hard ticket film at the Tower, downtown.