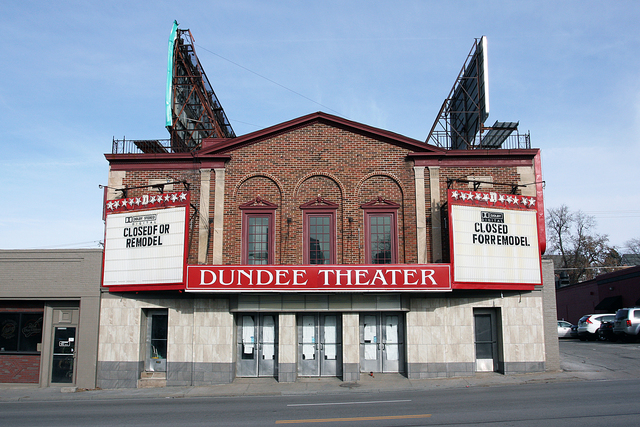 Once one of the many single-screen theaters in the city of Omaha, the Dundee Theater has out lived them all (not to mention a few multiplexes). Originally opened December 19, 1925, the original stage, dressing rooms, and even the gold curtains can all still be found right behind the Dundee Theater’s huge single-panel screen. Originally, seating was provided for 591.

In 1958, the Dundee Theater was acquired by Cooper Theatres and under their ownership the theater played mostly foreign movies until 1965, when it ran “The Sound of Music” for 118 weeks. After a few more tries at playing long-running musicals, the theater switched back to playing foreign movies, and is often mistaken as being one of the many porno-movie houses in the area at that time. In reality it was actually playing films like Ingmar Bergman’s “Cries and Whispers” and Federico Fellini’s “Amarcord”.

In 1974, Cooper Theatres ceased their theater operations and sold the Dundee Theater to two Omaha businesssmen, who planned to convert the theater into a family-friendly theater. This failed and the theater closed for a time before being purchased by the current owner, Denny Moran in 1980.

Under Moran’s ownership the Dundee Theater has undergone extensive renovations, including the installation of state-of-art sound system and high quality projection equipement. The Dundee Theater has been operating since 1980 exclusively as an Art and independent theater, running a daily regular engagement and special midnight screenings of classic and cult movies every Friday and Saturday night. In recent times I have seen “North By Northwest”, “Dr. Strangelove”, “Hard Day’s Night”, and many others.

It is a great attraction for the neighborhood and Omaha’s last single-screen theater.

The Dundee Theater was closed in early-April 2013 for renovations to be carried out, and it reopened December 1, 2017.

“Dundee Theatre to close for renovations”

“Built in 1925 as a vaudeville house, the Dundee will continue life as a venue for independent arthouse movies when it reopens sometime around the holidays or in early 2014, Moran said Wednesday.”

“Moran said he had no firm timeline on when the work would be accomplished, but he now expects the theater’s reopening to be sometime in 2015.”

Back in the 40’s when I was a kid my brother and I took our 12 cents for a ticket and 5 cents for popcorn to the Dundee Theatre and watched Roy Rogers, Gene Autry, or the Lone Ranger every Saturday morning. We couldn’t wait to get there because many of those movies were serials so we had to keep coming back. The place was packed and we had so much fun!

This item from the May 30, 1925, issue of Exhibitors Trade Review is surely about the Dundee Theatre:

The Dundee Theatre opened on December 19, 1925. It had a four-manual Hillgreen-Lane organ to accompany the silent movies that were its primary fare. Quite a few Internet sources say that the Dundee opened as a vaudeville theater, but in this suburban neighborhood location this fairly small house would have operated primarily as a movie theater, probably bringing in a few vaudeville acts as an occasional added attraction.

The archives of The Omaha World-Herald have this (partial) ad published the day before the theater opened.

The father and son team of John and Alan McDonald were among Omaha’s leading architects of the period. Hansen’s decision to give them the commission for this theater was an indication that he was well aware of the need to impress his potential patrons, the residents of this well-to-do enclave, with something more than an ordinary neighborhood movie house.

It was 50 years ago today that “The Sound of Music” premiered at the Dundee. With a reserved-seat run of 118 weeks, it’s almost certainly the long-run record holder for this venue. (Anyone know of something that ran longer?) It was one of ten runs in the United States and at least 24 globally that ran the movie continuously into a third year.

Sherwood will donate the building to Film Streams.

Film streams has finished renovating the theater and it reopens today!

March 2018 article about the renovations and reopening with photos.