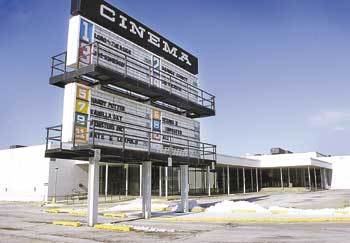 Theatre was opened October 30, 1968 as a two screen complex (each screen could hold about 950). Years later, a third screen was added (this screen could hold over 1,000). Another lobby was added with an additional two screens. Later, one of the original, the third screen, and the newest two were all split (bringing the total to 9 screens). One theater was added to the rear of the complex, but a couple of years later, this theatre was split to bring the total to 11 screens.

If my last comment was seen as an attack on someones comment, it wasn’t meant to be, just a correction of his/her facts. If you don’t allow that, than you need to eliminate this option.

The Showcase Cinemas located in Milan, IL; built in 1967, opened 1968. 2 screens each seating 960. Construction on Cinema 3 started the late fall of 1971 and opened the spring 1972 with its own concession stand which was rarely open after the first 6 months. Changing the marque out front was hazardous (dangerous during winter months)as there were no safety chains or guard rails to protect the ushers who worked after hours to change the letters( we also had the same issue changing the letters at the Memri next door). Usually you backed your car up to the base of the marque and put the extension ladder base in the trunk. You then climbed up to the first platform for the Cinema 2 signage, pulled the ladder up and then ran it through the hole in the platform for the Cinema 1 signage. Letters and numerals were tossed up one at a time, or you tied some together with a thin rope and pulled them up from down below. The theater also popped all of the popcorn in 20# bags for other QC theaters in a 10x12 room located behind the main concession stand. What was funny was that there were cigarette and candy machines located across from the main concession stand. Once a month starting in the summer of 1971, very hard ‘R’ and X-rated films started to be shown after the 10 pm hour. “Fritz the Cat” and “Cry Uncle” were just a few. As an usher or usherette, you needed an authorization signed by your parents to allow you to usher the ‘R’ and ‘X’ rated films. Average pay for the week was about $40. Family members tickets were 25 cents each. I ushered films of all ratings during my stay there. “Big Jake w/John Wayne”, “Bless the Beast and the Children”, “Drive He Said”, “Willy Wonka”, “Klute” w/ Jane Fonda. The list goes on. They split Cinema 2 and added the rest while I was in the military. The last theater to be split was Cinema 1 just before they closed the doors. There is more to this, but for another time.

This takes me back! Oh, the Disney movies I saw here, then Star Wars, Top Gun, Alien, Grease, Star Trek movies, The Jason scary movies, I could go on, and on. This was the best, cleanest, theater I can remember. Everyone was curtious, friendly, always had smiles. My sister and I would go on weekends for $1.25 for her, and .75 cents for me. They used to have these little orange drinks, that actually came in little plastic oranges. These Theaters remind me of the Sinatra Era. I remember light blue carpet, white walls, and chrome. I wish I had pictures of the theater back in her hey day. She was something! Sorry she’s gone. They should have made her a landmark. What a shame!

One of the cinemas are split to create 4 screens on November 16th, 1973. Grand opening ad in photo section.