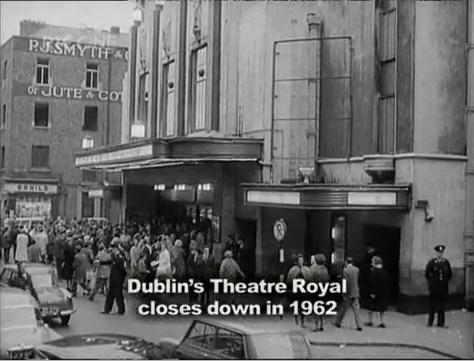 The Theatre Royal, the largest movie palace built in Dublin, or Ireland for that matter when it opened on 23rd September 1935 with a variety show on stage and two film shorts on the screen (no main feature film). It was the third theatre of the same name to be built on the site. The architects were Leslie C. Norton and Michael Scott of architectural firm Scott & Good, who designed the Theatre Royal with a stylishly Art Deco exterior, faced in white marble with bands of black separating three large windows over the main entrance and marquee. Stylized sculptural panels on the façade represented Eire and ancient male and female Celtic figures. Masks of comedy and drama were located at the top of the façade.

Inside, the style was totally different, with a Middle Eastern/Moorish Atmospheric style, including a 40 foot-deep stage and large screen. The theatre was equipped with a Compton 4Manual/16Rank theatre organ (with Melotone) which was opened by organist Alban Chambers. The Theatre Royal, for much of its life, featured live entertainment as well as films.

Adjacent to the right of the Theatre Royal was the Art Deco style Regal Rooms Restaurant, again designed by Leslie C. Norton & Michael Scott (Scott & Good) which had opened on 30th October 1934 on the site of the former Winter Garden of the previous Theatre Royal. On April 16, 1938 it was converted into the 700-seat Regal Rooms Cinema (which has its own page on Cinema Treasures).

In July 1951 Judy Garland appeared for a series of sold out performances. By the start of the 1960’s business was dwindling and the massive Theatre Royal building and the adjacent Regal Rooms Cinema were closed on 30th June 1962 due to competition from television, and were razed later in 1962. An office building Hawkins House and the current Screen Cinema was constructed on the site of this Deco/Atmospheric gem at the corner of Townsend Street and Hawkins Street.

There are now plans to demolish the office block that replaced the Theatre Royal.

Hawkins House was built on the site of the Theatre Royal and the Regal Rooms Cinema by their owners, the Rank Organisation. It has regularly topped polls since as the ugliest building in Dublin, but is fully occupied mainly by government agencies including the Department of Health. There are suggestions that the nearby Screen Cinema, built as the New Metropole by Irish Rank but soon disposed of on part of the site and still in use as a cinema, might also be included in redevelopment plans. So it is possible that Hawkins House, which already led to the demise of two cinemas, might bring down another one when it is redeveloped.

Hawkins House seems likely to survive, the recession in property seems to have put redevelopment plans on hold.

The site the theatre occupied was 91 feet wide and 108 feet deep.A Ross Scenograph machine was installed in this theatre.Does anyone know what this was used for.

Scenographs , better known as Brennographs were the cinematic version of disco lighting. They could be used with colour wheels to give a variety of lighting effects such as swirls and flashes.

Many of these machines were also capable of being used as ordinary slide lanterns for projecting urgent news items over the running feature. I can remember using one to project news of Yuri Gargarin’s return to earth.