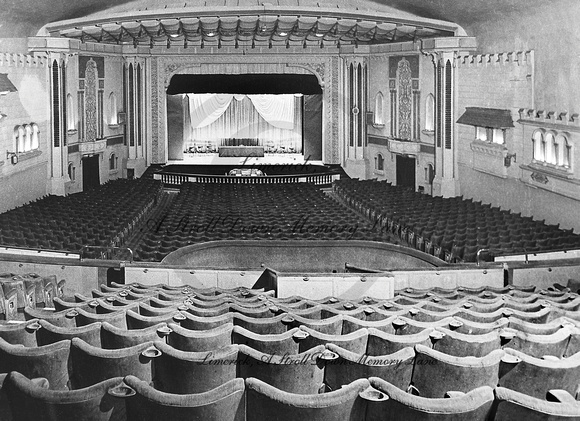 The Savoy Cinema opened on 19th December 1935 with the film “Brewster’s Millions”. Designed by Leslie C. Norton, the cinema was Art Deco on the outside, and not overly fancy. The Savoy Cinema featured both live stage shows as well as movies in its earlier years, and contained a Compton 3Manual/6Ranks organ. The interior was Moorish/Atmospheric in style and the proscenium was 42ft wide. It was equipped with a Compton 3Manual/6Ranks theatre organ. There was also a restaurant attached to the cinema.

The multiplex cinema that replaced the original Savoy, and retained the Savoy name, has itself closed and the complex was demolished during 2005. It is not intended to provide a cinema in the redevelopment and Limerick City is without any city centre full time cinema (there are multiplexes in the suburban malls).

There is a lot more about this cinema, amongst others, on the Art Deco Ireland Website at

The Savoy hosted many live concerts in the 70s and 80s. The most famous is probably Rory Gallagher’s 1972 concert which was recorded and is now a dvd (not sure if it’s an official one tho!). Among the concerts I remember attending at the Savoy are Horslips (3 times), Eric Clapton, The Undertones, Loudon Wainwright III, Don McLean, Janis Ian, Roxy Music and Madness. The closure and subsequent demolition of this wonderful venue constitutes a tragedy for the city of Limerick.

I remember going to the movies at the Savoy in the 1950’s. During intermission the organ rose from below the stage and we had a sing-along.
What happened to the organ?

Reading a biography of Limerick’s favourite son Richard Harris (and not Frank McCourt as some would argue.) In 1970 Harris released the one film he both directed and starred in – “Bloomfield” – and agreed to have the Savoy Cinema host the special benefit gala premiere. Harris flew in some of the class A celebrities of the era, including Roger Moore, Avengers and Goldfinger star Honor Blackman, Bee Gee Maurice Gibb and his wife Lulu for the event. Once the celebs were seated and the show was about to begin, someone called in a bomb threat to the Williams Street police station and the theater had to be evacuated while the 100 Garda and Special Branch officers searched the theater for the bomb. Harris was, understandably, angry and later said, “I can think of 50 fuckers who made that call, but none of them had anything to do with the IRA or the UVF.” RIP Richard Harris.

The 1500-seater was built on the site of a flour and grain store and opened on 19 December 1935 by Irish Cinemas with the ceremony performed by the local Mayor Mr J. Casey. The auditorium was in Moorish style and designed on the stadium principle. From the mid-1960s it became predominantly a live music venue with the likes of Roy Orbison, Tom Jones and Val Doonican appearing there. Eamonn Andrews also presented a quiz show at the venue. It closed briefly in February 1975 but was reopened in October that year by Tony O’Mara and P.J. Hayes. The last show to take place was the Tops of the Town final on 26 March 1988. It was replaced with a new five-screen Savoy complex which itself was demolished in 2005.