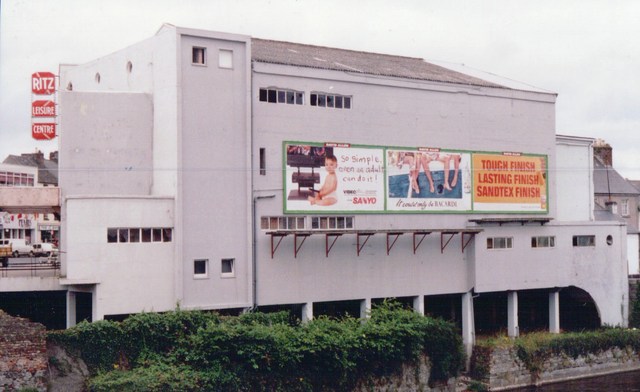 The Ritz Cinema opened in 1939 with 987 seats (later reduced to 822), designed in Art Moderne style. It was located close to the River Shannon.

The Ritz Cinema was closed in 1984 and then lay empty and unused for many years, finally it was was razed in 1999 and an apartment complex was built on its site.

This is the correct Ritz Cinema. It is common practice for the head of an architectural firm to take credit for work done by another member of the ‘team’. In the context of the headers on Cinema Treasures site they should read for this theatre: Architect: Bill O'Dwyer. Firm: Michael Scott & Associates.

The Kine. Yearbook,1944 gives the seating capacity as 977. Performances were once nightly and there were occasional Variety shows on the stage. The proscenium width was 30feet. It was operated by Western Cinemas of Dublin (later in the 1960’s known as Amalgamated Cinemas (Ireland) Ltd.). and was still listed as operating in the Kine. Yearbook, 1966 with a capacity of 822 seats.

Sorry I don’t have a closing date, but looking at the photo’s on the link given above, it was last used as a leisure centre, prior to standing derelict for a number of years and final demolition in the late 1990’s

Demolished 1999 after being out of cinema use for several years.

There is more information, and some photos, about the Ritz Athlone on the following web page. Indeed this site has a considerable number of pages devoted to Irish cinemas.

FOr several years before closing, the Ritz operated as both a cinema and an amusement arcade – the stalls were converted to become the arcade, while the balcony area continued as a cinema.

Photos of the Ritz before and after vandalisation on these pages:

Some more great pictures on this gallery.

The story goes that Saint Colmcille, the prophet, foretold that a building would collapse into the Shannon. On the opening night patrons allegedly sat on the left hand side of cinema as the right hand section overlooked the Shannon. The double-bill for the opening was Deanna Durbin in Three Smart Girls Grow Up and Walt Disney’s Brave Little Tailor. Nearby theatres states nothing within 30 miles but the Adelphi in the town is also on here.