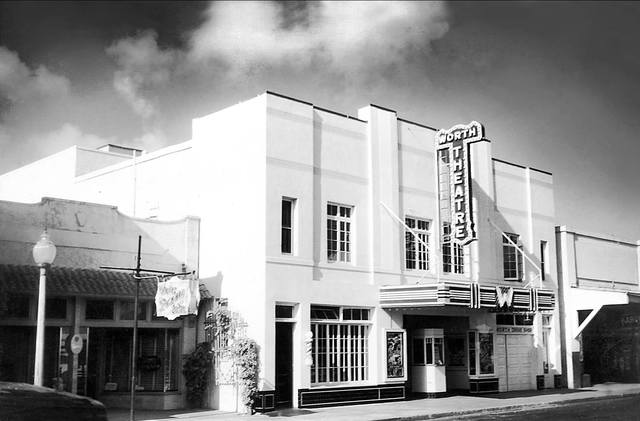 The Oakley Theatre opened in 1924, by two brothers, Clarence and Lucian Oakley, at a cost reportedly around $150,000. It was designed in the Mediterranean Revival style which was popular in the area at that time. The letters “OT” can still be seen on the wooden beams of the auditorium’s ceiling. For the theatre’s opening night, a silent film, accompanied by both a Wurlitzer organ and live orchestra as well as a live stage review were on the program.

In 1928, a hurricane hit the Lake Worth area, and caused severe damage to the Oakley Theatre. The brothers vowed to rebuild, and by early-1929, they had. The style of the new theatre would be done in an Art Deco style. Just a few months after reopening, the Oakley Theatre was wired for sound films, but due to the Depression, business was not strong and the Oakley brothers fell into financial difficulties. Lucian committed suicide in 1931, and a year to the day after Lucian took his own life, Clarence died of a heart attack. It’s said to this day, the ghosts of the brothers haunt their theatre.

After the Oakley’s deaths, the theatre changed hands, formats, and names a number of times, including mainstream Hollywood movies, art films as the Capri Art Theatre, and, towards the end, adult films as the Playtoy Theatre. By the early-1970’s, the old movie house was in decrepit shape, and vacant for some time.

In 1975, the 22 year-old Lake Worth Playhouse, which had been meeting in part of the City Hall Building, purchased the former Oakley Theatre for their new home, and gave the theatre a much-needed renovation. In addition to legitmate theatre (including traditional musicals and cutting-edge modern drama), the Playhouse features a Playwright’s Workshop, youth theatre, poetry slams, concerts, and various special events.

I music directed a couple shows there recently. I’m the one trying to find out for the theatre because they don’t know. It was a Wurlizer Piano Console (someone in American Theatre Organ Society told me that)…they even know the Opus number of it (I have that info here somewhere). They’re trying to restore the theatre but they suffered damage from the hurricane this year and last so money had to be diverted to roof repairs, etc.

Ed: Thanks so much for replying to my organ inquiry. I’m not an organ society member, but do know several who are with MTOS (Metrolina Theatre Organ Society) in the Charlotte NC area. So sorry to hear about the Playhouse roof damage caused by hurricanes in FL as many theatres were destroyed or damaged along the MS coast and in N.O. If you go to the Sunrise Theatre CT link, you’ll learn about the restored 1923 theatre in Ft. Pierce FL. A good friend of mine sent me the 1/15/07 Palm Beach Post article as I didn’t realize this theatre ever existed. A member by the name of Paul Noble contributed the Sunrise to the CT list of theatres. Thank you Paul.

Ed: If you go to my profile page, you’ll find my email address.

Occasional special event screenings are being scheduled for Lake Worth Playhouse’s mainstage. They’re filling a void left by the demises of the Carefree/The Theatre, once the Palm Beaches' alt fare mainstays.

One goal of their post-hurricane restoration has been accomplished: they have their beautiful new marquee completed.

Street view notes: This LWP marquee is fairly new, installed in recent years. To the left, a little bit of the Stonzek Studio Theatre (still in use as a digital minicinema and occasional live stage space) may be seen.

Scanning the Palm Beach Post/Google archives, I’ve seen frequent references to an art/adult cinema, the Capri, “in the heart of Lake Worth.” Does anyone know if LWP previously had this alias?

Worth Theatre should be added to Previous Names.

Undated photo as the Worth Theatre added, credit Historical Society of Palm Beach County. But likely circa 30s-40s.

Sporridge, in response to your question from June 25th, 2011 regarding newspaper references to the Capri, I found this Palm Beach Post article from May 7th, 2014 saying the Lake Worth Playhouse had been the Capri Art Theatre, then in 1968 became the Playtoy!:

“When Lake Worth Was the ‘Skin Flick Capital of the Country‘”

(When I was a kid I remember some regular movie theaters having an “X” on their marquees, but this is the first I’ve heard of one changing its name to make its adult nature more obvious.)

The article, that begins with an exterior photo and ends with a list of some titles that screened there, says the Playtoy became embroiled in an anti-indecency court case over the film “Deep Throat” that closed the cinema in the early 1970‘s, before it was purchased by the Lake Worth Playhouse nonprofit group that converted it into a venue for live theater.

A visitor to the area today would perceive no indication of the Playhouse’s former less respectable identity.

By the way, a good reason to visit Lake Worth is the Street Painting Festival that takes place annually in late February on Lake Worth’s downtown streets including in front of the Playhouse.

History of the Lake Worth Playhouse page on the Playhouse’s website:

The Lake Worth Playhouse is discussed and visited starting at 2:19 in this Lake Worth episode of the PBS tv program “On the Town in the Palm Beaches” on Youtube, (although the exterior shots at 2:41 and 4:03 are actually of the Lake Theatre):

The Street Painting Festival is shown at 10:47 followed by the Cultural Council of Palm Beach County housed in the former Lake Theatre.