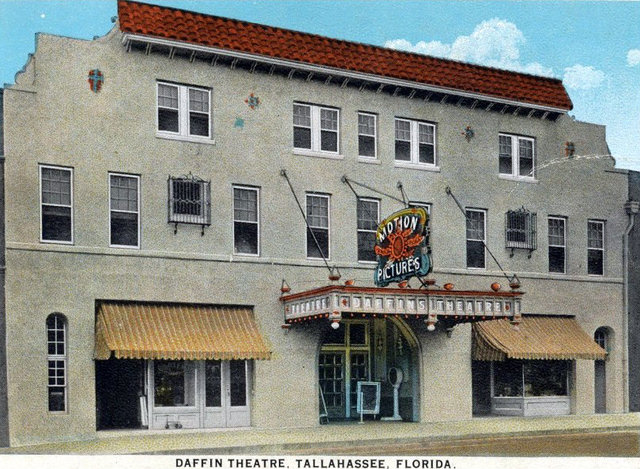 Opened around 1910 in a building that formerly housed a livery stable as the Capital City, the theatre was purchased by C.E. Daffin in 1914 and renamed the Daffin Theatre with 600 seats. In 1932, it was remodeled and renamed State Theatre, reopening February 13, 1932 with Carol Lonbard in “No One Man”. It was short lived as it was destroyed in a blaze on December 5, 1932.

A new and larger State Theatre was built on the site, designed in Art Deco style, including a stylish marquee that reached across the entire front of the building, five sculpted panels on the façade, and a two-story tall vertical sign. The second State Theatre was built for E.J. Sparks, a subsidiary of Paramount Pictures Inc. It opened with Grace Moore in “One Night of Love”. By 1957 it was operated by the Talgar Theatre Company. By 1968 it was operated by Kent Theatres Inc. It operated as a movie house until closing in March 1972. It was razed in 1988.

I liked this one better than the Florida after the fire.The “new"Florida was painfully plain.I remember going to the State in 60 or 61 and watching Gone With The Wind.It used to be re-released every few years.It had a great balcony.Living in Tal.for 3 years in my formative early 60’s time frame was a fun experience.It was user friendly for a kid with a bike.There was a large Black theater on w.Tenn.St.that reallt did a land-offices business till the late 60’s.

I took a single slide photo of the State in 1981. It was closed, but looked in reasonable shape. The vertical sign was indeed the one shown in the historic photos (and the color photo of it being removed). I hope it was saved. The deco facade was completely painted white, and a pale green trapezoid marquee had replaced the moderne one in the old photos. It had reader boards on its angled sides, and “STATE” in block letters had been on the side paralleling the street, but the letters had been removed, leaving outlines where the green paint had not faded.

I explored the State several times while it was still operating as a movie theatre. It had quite impressive stage facilities, and there was a basement under the stage which contained several dressing rooms. In fact, new managers would live there from time to time until they found permanent housing. I remember seeing a sign there reading “All good show folks eat at the (name forgetten) restaurant.” It was a grand old theatre with a rich vaudeville history. Tallahassee oldtimers told me they saw Harry James and his band perform on that stage. As the theatre was being razed, I managed to save a small piece of the screen.

The state theatre was always advertised as “A first Run Theatre'.July 20 1950,"GUY WHO CAME BACK”. is playing. Irv,I saved a piece of screen from my old theatre in town,National Hills Theatre.

Florida Memory says that the State Theatre was on the north side of College Avenue between Adams and Monroe. That’s the 100 E. block, and the historical photos show that it was on the lot west of the alley between those two streets. Today the lot is occupied by a tall office building called Highpoint Center, for which LoopNet gives an address of 106 E. College Avenue. That must have been the theater’s address as well.

Florida Memory also says that the second State Theatre opened on September 27, 1934. From the old photos it looks like the Daffin Theatre had actually been next door to the new theater’s site, so it probably had an address of 104 E. College. Now there’s a parking structure on that lot.

I am an “oldtimer” per “irvl” comments here on Jan 16, 2009; I saw Harry James perform at the State Theatre either Fall 1956 or Winter 1957. I was a freshman clarinetist in the FL State Univ bands. I also sat through 2 Louis Armstrong performances in Tallahassee around the same time. Thanks for jogging my memory.

Charles E. Daffin built and opened Daffin Theatre 1-A in 1912 in Tallahassee. In 1921, Daffin 1-B was launched with a new front and many improvements. With the movie industry expanded, it is reported that he he bought property to the corner of Monroe Street and College Avenue not far from Daffin 1- and built Daffin Theatre 2-A (It looks like the same facade to me, though he very likely may have built an entirely new auditorium that made better usage of the land not pictured behind the theater.) The Spanish architectural-styled theatre was remodeled as Daffin/State 2-B switching names to the State in 1932. That theatre burned so a new Deco styled State 3-A was constructed. That was the longest lasting of the establishments running until 1971 and being demolished in 1988.

As best I can tell the last film to show was Minnie and Moskowitz on March 28th, 1972. Although there’s a “from Tomorrow”, Mary, Queen of Scots, there are no further listings for that title.