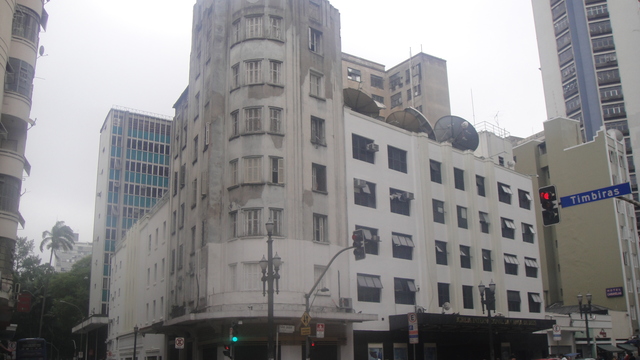 Located in the centre of Sao Paulo on the main Avenida Sao Joao at the corner of Rua dos Timbiras. The Cine Metro was opened on 15th March 1938 with Robert Taylor in “Broadway Melody of 1938”. It was designed by American architect Robert R. Prentice for Metro Goldwyn Mayer (Loew’s Inc.). The Cine Metro was one of the best Art Deco style movie theaters in Sao Paulo. It was converted into a twin-screen cinema in 1977. Its interior was completely modified.

The Cine Metro was opened by Metro-Goldwyn-Mayer as the premier theatre for MGM films in Sao Paulo. The opening presentation was “Broadway Melody of 1938”.

It was twinned in 1977 (known as Metro 1 and 2) and in 1981 the two screens were given individual names;Metro and Paissandu.

I presume that the current church use has returned the auditorium to its original orchestra and balcony configuration.

If anyone has a cross street or the name of the church, let me know. I may be in that area in a few months. Thanks.