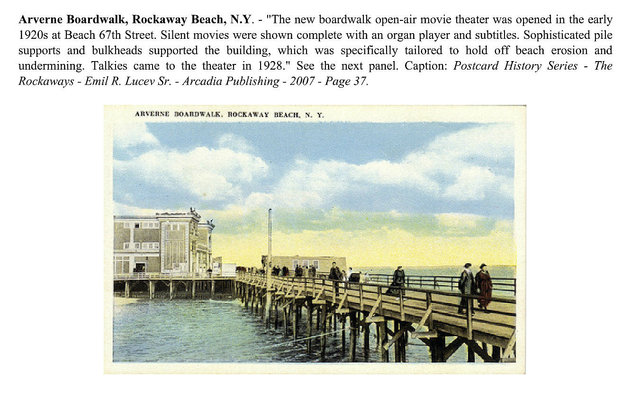 I have uploaded three postcard images of the Boardwalk courtesy of rockawaymemories.com. However, this is NOT the Arverne Theatre, but rather a theatre in Arverne. I have seen newspaper ads where both the Boardwalk and the Arverne appear. I’m working to “get it right” before I create an entry for the Arverne.

Re all above. The Arverne Pier Theatre went for a swim out to sea in 1914. Despite it’s being at the water’s edge the pilings and bulkheads supporting the Boardwalk held for many years. Per the notation with the postcard it was still viable in 1939.

The Arverne Pier Theatre did show movies for a while. It was mentioned in The Moving Picture World of July 5, 1913, as one of several houses in which Al Lowe had installed Kinemacolor equipment.

I found a New York Times article about the 1914 storm that destroyed the Arverne Pier Theatre, saying it had a seating capacity of 1500 (other accounts say it held 1200) and cost $50,000. It also gave the location as near the boardwalk at Arverne Avenue,which doesn’t help much, as the street doesn’t appear to exist anymore, and I haven’t access to older maps. The neighborhood of Arverne extends from Beach 56th to Beach 73rd, so it was located somewhere in that stretch. It would be nice to narrow that down. Also I came across a 1912 nighttime photo of its entrance with a sign advertising photo plays at the website of the Museum of Fine Arts in Boston which can be viewed here:

The caption of the second photo in this slide show at Rockaway Memories says that Gaston Avenue became Beach 67th Street. The caption of the fourth photo says that the renaming had taken place by 1920. The site of the Arverne Pier Theatre must have been very close to that of the Boardwalk Theatre.

Lost Memory, thanks for the mention of Gatson Avenue, it led to a bit of discovery. Joe, your source and LM’s guess at the location seem to be off by a block. Apparently Beach 67th St once went by the name of Vernam Avenue. One block west was Gaston, now known as Beach 66th St. I discovered this with 2 mentions on the Rockaway memories website, one being a list of the Beach Streets in Rockaway and their original names as reported in the local newspaper in 1993 on the occasion of the 100th anniversary of their publication. The second mention on that website deals with the elevated train line, which I won’t link here but also mentions Beach 66th as the former Gaston Avenue. However, here’s the link for street name changes :

I also found an extensive list of street name changes in Queens according to the US Census records. It is thought this list dates to the 20’s or 30’s. This list also mentions Gaston as now being Beach 66th.

A June 16, 1907, New York Times article mentions “…the Pier Theatre, at the foot of Vernon [sic] Avenue….” Another bit of complication. Was the 1907 Times article right about the location, or was the 1904 advertisement Lost Memory cited right?

But at least we have the approximate location, which was probably on the short block between Beach 66th and Beach 67th.

Why not just create an entry for the Pier and upload the photo there. There has been enough information to set this up discussed above.

I would go for the Pier at Gaston because of the ad. Therefore, the reference to it being at Vernam in Old Rockaway, New York, in Early Photographs by Vincent Seyfried and William Asadorian would seem to be incorrect. They, however, say that Vernam became 67th whereas other sources say Gaston did.

Armed with my trusty magnifying glass I scanned the photo on Page 42 of the book. A sign on the facade and a vertical, in fact, do read Arverne Pier Danse. So they probably were directly across from each other.