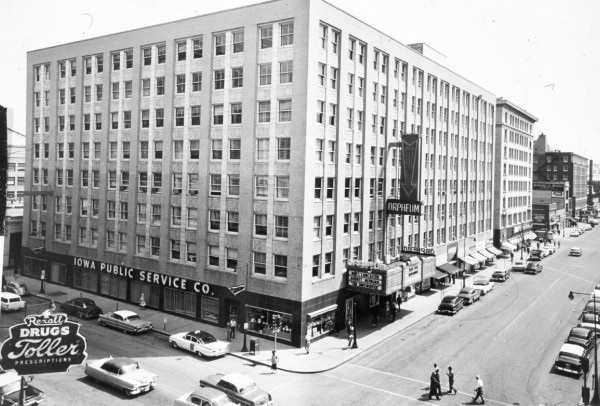 Throughout the years, the Orpheum Theatre has been used for symphony performances, ballet, special attractions, and hosted entertainers such as Fred Astaire, Tallulah Bankhead, and Katherine Hepburn.

Beginning in 1999, the Orpheum Theatre was spectacularly restored to its original appearance, reopening in fall of 2001 after having been closed for nearly a decade.

An excellent article with background information can be found on this link from Architecture Week: View link

The Fall 2008 issue of Classic Trains Magazine has a neat color photo taken in May 1948 of two Sioux City Service Co. trolley cars meeting at Turner and Villa streets. One car has on its front a poster ad for the Orpheum Theatre. Movies are Frank Sinatra in “The Miracle of the Bells” plus “co-hit” “My Dog Rusty”.

The Orpheum Theater at the corner of 6th & Pierce is actually the third theatre in Sioux City. The second building was known as The Capitol and was remodled by Rapp & Rapp after the building of the present day Orpheum. They did not design the theatre on Nebraska Street, only the theatre on Pierce. I worked at the Orheum from the early 1960’s to the 1970’s and writing a book.

PaulWolter the first Orpheum was the Victory Theatre or originally named: Lyric Theatre.

This theatre building looks like a department store or office building from the outside(besides the theatre sign)!!