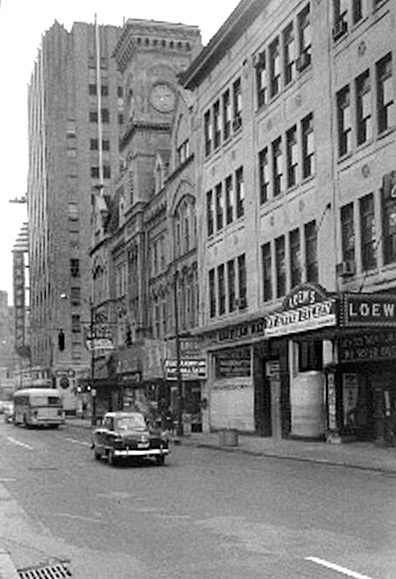 The Vendome Theatre was built as an opera house with two balconies and sixteen boxes. The main curtain featured scenes from the Paris Place Vendome. The first performance was October 3, 1887 featuring Emma Abbott in “Il Trovatore”. It was rebuilt in 1901 to the plans of architect Frank Cox.

Loew’s took the hall in the mid-1920’s providing vaudeville and movies. The last movie was “The Dirty Dozen” seen on the evening of August 8, 1967. Patrons that night reported smelling burning rubber. After the last show a thorough search of the theatre found nothing. Later the janitors discovered the upper balcony ablaze. The ceiling and roof then caught fire and collapsed into the auditorium bringing both balconies to the floor.

The Vendome Theatre’s lobby survived as retail space until 1986.

I remember when Loew’s burned. Even though it’s been a long time ago I can’t forget the marquee proclaiming “The Dirty Dozen..Hottest Picture in Town.”

The Encyclopedia of the American Theatre Organ, Vol.4, known more as the ‘Wurlitzer Illustrated History’ volume, page 660, completed and published in 2005 after organman David Junchen’s death, lists a Wurlitzer Theatre Pipe Organ, Opus 1268, as being installed February 8, 1926, and being a Style H Special, which I believe to have been a three manual organ with probably more ranks than were on the Moller it replaced.

The Vendome Theatre was substantially rebuilt in 1901 to the plans of architect Tignal Franklin Cox, who had recently moved his office from New Orleans to Chicago. A photo of the Vendome’s original facade can be seen on page 10 of this PDF file, a short biography of Frank Cox by his great-granddaughter, Robin Yonish.

This is slightly off topic, but just across the street. There was a man who had a newsstand at the side of Armstrong’s at Church and Capitol Blvd for years. Some time in the fifties he was run off the streets by a bunch of old ladies who were offended that he sold girlie magazines. For a while he moved to a store on Commerce Street but without the foot traffic didn’t last long. Can anyone tell me his name or what became of him?

An advertisement for Nashville’s new Theatre Vendome, then under construction, appeared in a December, 1886, issue of The New York Mirror and listed the architects as J. D. McElfatrick & Sons.

The Nashville Tennessean ran a slideshow to commemorate the anniversary of the fire on August 9, 1967. Link