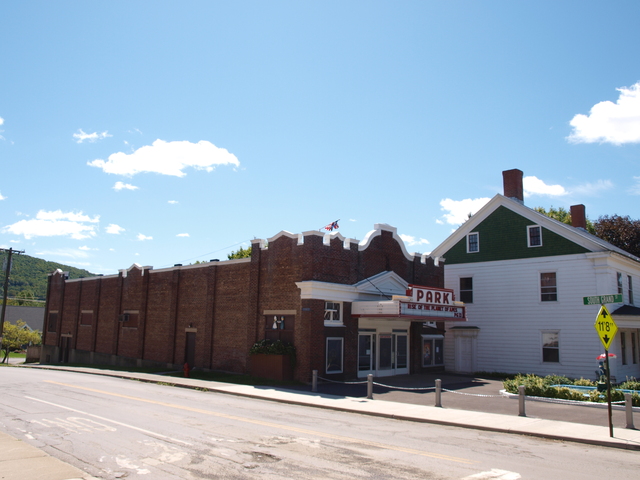 Vintage 1921 theatre in Cobleskill, New York. Still plays on only one screen - movies are only $4! It’s a great place and definitely a different experience than a modern multiplex.

I was at the Park last weekend, and said hi to the current owner. In the lobby are framed advertisments from their 1944 new year’s eve show, 5 features for 44 cents. Yes, it’s only $3.50, and popcorn and drinks are a buck each. I’ve seen a few movies there, nice large screen, large auditorium.

I stopped in Cobleskill on the way back from Troy to take a picture of a B&B that bears the last name of a friend.
I came to a fork in the road and saw an unusual marquee like vertical sign.
When I got closer I saw it said Park Theatre, so I stopped for a look on the way back.
It looks to be stuck in time sometime in the 1970’s.
With a modern flick though.
View link

The Park’s website has now posted a few vintage photos, and a couple shots of the current interior.

Here is an interior photo:
http://tinyurl.com/ykmo5xl

Can anyone speak to the interior condition of this theater? Is any original decor or ornamentation left? Ken’s link is no longer working. Does anyone had interior photos?

Interior pictures are posted on the Park Theater website(www.parktheater.net). Auditorium picture is the same interior since the remodel in 1954 for the installation of Cinemascope. Prior to that, there was a stage with a red curtain with gold design trim and footlights. At the rear of the stage was a yellow title curtain and 1.33:1 aspect ratio screen. All had to be sacrificed for the Cinemascope 2.55:1 screen installed in front of the stage and new dark blue curtains added. Why do i know all this? I grew up in that theater. I knew the original owner Frank Weeding and head projectionist Allen Jones who later purchased the theater when Mr. Weeding retired. The current owner installed new projection and sound equipment, new screen,and upgraded the heating system, plus other improvements. When I look at that picture of the auditorium, it brings back so many fond memories. The first movie that gave me nightmares(“The Thing” 1951), the first to make me cry (“Titanic"1953), first 3-D movie("House Of Wax 1953}, first Cinemascope movie(The Robe” 1953). Yes, the Park Theater, Cobleskill, NY will always have a warm spot in my heart.

I attended the Park Theatre on November 14, 2013 and was totally impressed with the operation of the theatre and the level of support it receives from the Cobleskill community. The admission prices are reasonable, the concession prices are extremely reasonable and the theatre itself has been lovingly maintained. The owner has recently installed digital equipment and…(drumroll please)…the theatre has an operating curtain in front of the screen! The entire presentation is a great example of what we used to call showmanship; the owner greets his patrons both before and after the performance while one-sheets decorate the lobby area.

Any reader of Cinema Treasures should make the trip to Cobleskill to show their families what theatres used to be like before being turned into parking lots all over the country.

The Park Theatre has been open continuously since 1921 according the concession operator I spoke to there the other night. Went for the 7pm screening of Star Trek Beyond. Love this theatre, a true Cinema Treasure: as old-school as it gets!

I pass this rare gem every 3 or 4 years on road trips. I attended this theater with raspy voiced Maryann who was from the Albany,NY suburbs and we saw “The way we were”. I hope this stays open forever. It’s a real historic cinema treat. -Dennis Visco