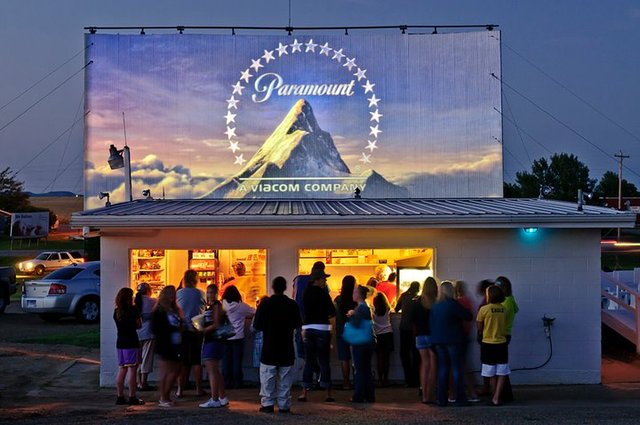 The Drive-In was opened in June 23, 1950 when it was operated by Harvey Fast. It could accomodate 208 cars. By 1955 it was operated by Harvey Fast and Co-Op Theatre Services. It is one of the few outdoor theaters which is still in operation in South Dakota. The Winner drive-in can accomodate 375 cars, and features a playground, and a section of outdoor stadium style seats. Harvey Fast passed away and the drive-in continued to be run by his wife. From 2020 it is operated by his daughter & her husband. The theatre’s season runs from May through September.

The Winner Drive-In is one of three drive-ins to be located in Winner (the others were the Pix Drive-In, opened in 1953 and closed in 1998 and the shortlived Shoo-Fly Drive-In which opened in 1949 and possibly only lasted one season). They have their own pages on Cinema Treasures.

Actually the Winner drive-in and the Pix drive in were fierce competitors! The Winner was Winner’s (pop. 3137) first drive-in and was operated by Mr. & Mrs. Harvey Fast. Mrs. Fast still operates it.
The Pix Drive-in was built a few years later by Roy Metzger who owned the indoor Pix and Ritz Theatres downtown. After Roy passed away, Rick Meister took over the downtown Pix and the Pix drive in. The Ritz was sold to a church. The landlord at the Pix drive-in decided to use the land for other developement and refused to renew the lease so the Pix drive in closed and the land is now used to park construcction equipment.

From the Winner FB page

While we are waiting for spring and warm summer nights and drive in movies, I thought I would share this with you. I just came across it tonight while going through some things. It was written by my dad, Harvey Fast, when he was still alive, in 2000.

“I built the Winner Drive In Theatre in 1950, 1 mile east of Winner. Harry Jorgensen was the contractor for the buildings, Clarence Woidneck did the dirt work, Jim Nance was the electrician and Bob Stracke did the carpentry work.

The original screen measured 48 x 50, and was built on the ground and lifted into place. Cables were tied to the screen. One was anchored to Harry’s cement mixer truck and one was anchored to my dump truck. To the south we tied the cable to Woidneck’s dirt scraper. Clarence started pulling the screen up as Harry and I backed up toward the screen. When we got about half way up, Harry said he began to wonder what would happen if the dirt mover would not be able to stop and the screen would go on over. He said he had visions of his mixer truck flying through the air and landing somewhere up in the 7th row. However, it went up alright and was anchored in place. Had it flipped over Harry and I might very well have been the first men in orbit. Harry in his mixer truck and me in my dump truck. Between Jim and Harry, the wit and humor filled the days and before long we were in business.

In 1955 we enlarged the screen to 88 x 55 to accomodate cinemascope pictures. It is slightly curved to give the picture more depth.

In 1955 I married Betty Wilhelmsen and we had 2 daughters, Kim and Lori. We have always had a family oriented business and both girls were always, and still are active in the Drive In. Lori started running the projectors when she was 14 and ran them for 8 years. I’m sure she was one of the youngest projectionists ever. Lori married Mick Nagel in 1984 and lives in Rapid City They have 2 children, Jenna and Jerred. Kim married Larry Nordsiden in 1978. They live 1 mile east of us and have two daughers, Lindsey and Lacey. The 4 grandchildren enjoy the Drive In and are always willing to help.

In 1991 a tornado went through and took part of the screen, so we decided to resurface the screen once again. The masonite was taken off and replaced with corrugated steel. Elroy Croston was the contractor for this job. The screen has withstood many strong winds and is still in place today.

Through the years the theatre was really put to the test. With TV, daylight savings time and vcr’s, however our determination kept us going, along with our philosophy to treat people the way we want to be treated.

Daily maintenance and a lot of hard work has kept our theatre looking good and helped us make it into a business to be proud of.

The year 2000 has been a special year for us. Besides celebrating the 50th anniversary of the Drive In on June 23rd, the Area Chamber of Commerce honored us as Retailers of the Year at their Annual Banquet.