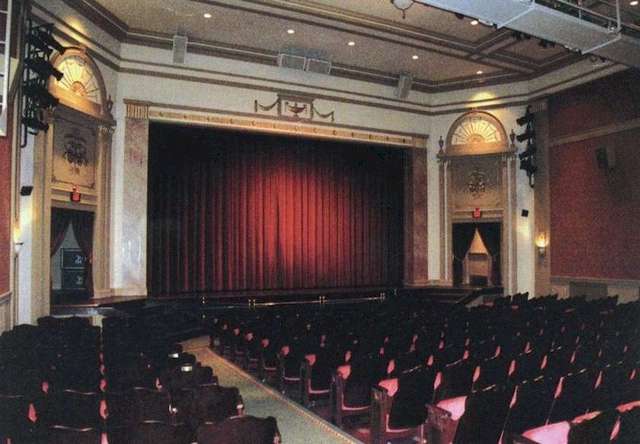 Opened in June 1932 as the Westhampton Theatre with 600 seats. This beautifully renovated movie theatre has been transformed into a much needed state-of-the-art performing arts center for eastern Long Island. This theatre offers a complete film program for art and first release films as well as live performances year-round.

I am honored to be the first one to offer comment on the one theater I can honestly call my favorite movie theater of all time.

The only history I can offer is that this theater opened sometime in the 1930’s, was owned by United Artists and closed just after Labor Day weekend in 1996. The last movie it showed was THE FAN. A woman affectionately known as “Movie Mary” worked there most of her adult life until the last movie performance. It remained closed for about a year until reopening as a Performing Arts Center. Today, it still shows foreign and independent films, but only in between live
performances.

One need only watch the movies THE MAJESTIC or SUMMER OF ‘42 to get an idea of what it was like to grow up every summer in a seaside community like Westhampton Beach with this local theater in town. During my time, it played some of the best (ROCKY, STAR WARS, RAIDERS OF THE LOST ARK, TERMINATOR 2) and some of the worst (HALLOWEEN III, BATMAN FOREVER) movies ever. I particularly remember enjoying films with a beach or seaside theme to it at that theater, like ORCA: THE KILLER WHALE and JAWS 2. Movies like this seemed only fitting in a beach town.

The theater was (and still is, I guess) old fashioned and classic in every way; from its protruding marquee, it’s art-deco lobby, concession counter and its balcony. When it shut down in 1996, a big part of my childhood and history went along with it.

I saw Fellini’s LA DOLCE VITA there in 1997, shortly after re-opening. I haven’t been to a movie there since.

This theatre opened in June 1932 and the architect was John Eberson.

The conversion to the PAC resulted in the loss of several dozen seats to accommodate the techie stuff needed for live performances.
The sound system for films is spectacular. This is such a jewel box of a space I’m glad is was rescued. Actually, the PAC has added to the right side of the original structure to provide a bar/reception area on the main level and offices on the balcony level.

The owners of this theatre made a huge mistake of replacing the stage speakers that where put in here by John Allen of HIGH PERFORMANCE STEREO. The only remaining components from the original and much superior system are the surround speakers and BGW amps.

I hosted a teenage movie party; spaghetti at moniebogue when the youngs ran it, and shenandoah on the screen.

What was the original name and any subsequent names of this theater?

Originated as Westhampton. Original marquee still used. WHBPAC created after UA dropped it from the roster. Purchased for a relatively small sum, under $250,000, I believe. A lot of $$ into the restoration and expansion of the facility. A jewel.

Added photo of crowd in front of theater for the St. Patrick’s day parade as published in 3/15/2014 Newsday.

Sal “The Voice” Valentinetti’s EP Debuted # 1 on ITUNES Top Jazz Albums Chart. Sal first learned the American standards at his grandmother’s knee and his passion grew further when he discovered his hidden vocal talent in his teenage years. “Sal the Voice,” as he is known by everyone form Brooklyn to Bayshore, can be found on most Sundays sipping cappuccino at the cafe, telling stories, making jokes and planning his next move— to bring back to American pop culture the consummate, classy, old-school entertainer with a heart of gold. When his grandmother passed away, her music was all Sal had to remember her by. He had previously tried out for season 14 of American Idol, where he successfully made it past the auditions but did not proceed to the live shows. On season 11 of America’s Got Talent Sal wowed the judges and won Heidi Klum’s golden buzzer. He then made it past the Semi-Finals and competed in the Final Show. Sal breathes fresh air into the classics; “The Way You Look Tonight”, “My Way”, “Summer Wind”, “The Girl From Impana”, “Mack The Knife”, “Love Is A Many Splendored Thing”. Check out Sal’s hot debut CD and his classic Christmas CD. Sal will entertain you like you have never been entertained before. Advance Tickets on sale now.