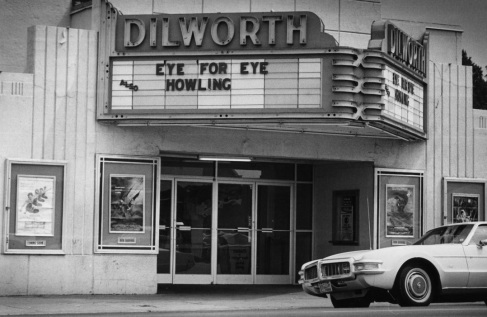 The Dilworth Theatre opened on July 15, 1939 with Gary Cooper in “The Cowboy & the Lady”. Located in the Dilworth neighborhood of south Charlotte it was operated by North Carolina Theaters, a subsidiary of Publix. Glenn Grove was its first manager. Newspaper advertisements called it “The Friendly Theatre”. In December of 1939 a 20 minute stage show and a drawing to win a Firestone bike were features of Saturday matinees.

The Dilworth Theatre was a small, single story theatre of Art Deco design. It actually opened as a second run theatre, but in the 1940’s it started running new releases and was operated by Paramount Pictures Inc. through their subsidiary H.F. Kincey. In the early-1960’s its run of “Cleopatra” set a record for Charlotte movie attendance. It was broken by the Carolina Theater’s run of “The Sound of Music” several years later.

In the late-1960’s the Dilworth Theatre went back to second run movies, serving the inner city community of south Charlotte. It was considered an important centerpiece of the community. In February of 1977 the Rev. James Barrnett and Concerned Black Citizens painted and repaired the theatre. People shared fond memories of the movie house with the local newspaper. In the 1970’s the Dilworth Theatre ran martial arts movies out of Hong Kong. With the rapidly changing face of the Dilworth neighborhood the old theatre seemed to have found its niche. But January 10, 1984, the theatre burned to the ground. Arson was suspected.

Dilworth has always been one of Charlotte’s most beautiful neighborhoods. It was home to actor Randolph Scott – his house is located on Dilworth Road. He is buried in Charlotte’s historic Elmwood Cemetary.

The Dilworth Theatre was known for its green exterior, and its neighborhood charm. It served as an entertainment venue for south Charlotte residents for almost 50 years. An interior design store and parking lot are located at the address on South Boulevard. Today Dilworth is a neighborhood of condos, bistros, trendy shops, and old city charm. It’s a pity the old movie house didn’t survive. It would fit well in it’s new neighborhood.

This theatre opened 15 July 1939 and the architect was Erle G Stillwell.

Mentioned briefly in the book about the Carolina theatres business by William C.Cline “STROKE OF FORTUNE” he writes a “Mr.High runs the DILWORTH and CAROLINA THEATRES in Charlotte.

Pity Charlotte was so small minded to lose all her old theatres downtown.My hometown of Augusta has SAVED three Downtown Theatres from the wrecking Crew.

Chuck1231 and MikeRogers:
I’m doing extensive research on this to why WEST SIDE STORY didn’t come to Charlotte until 1962. Charlotte was the first to book the movie as an exclusive enagement showing on June 23,1962. Other cities within the Carolinas didn’t get the film until July or August of 1962,since the film was originally released in 1961.
E-Mail:

The Dilworth Theatre is Getting the English-Language Version of “MARRIAGE,ITALIAN STYLE” in 1964 after a five month run in New York at the FESTIVAL and LOEW’S TOWER EAST.General Release.Notice Atlanta was not listed?

I have the ads for the showing of WEST SIDE STORY at the Dilworth Theatre in June of 1962. I also had the pleasure of finding the ads for the roadshow engagement of CLEOPATRA too. I will post them later.

CLEOPATRA was a reserved seat engagement at the Dilworth Theater on June 26,1963. It was the only showing of the film in the Carolinas. It was a phenomenol hit that played to capacity crowds for over a year before it ended its astounding run in mid-1964. 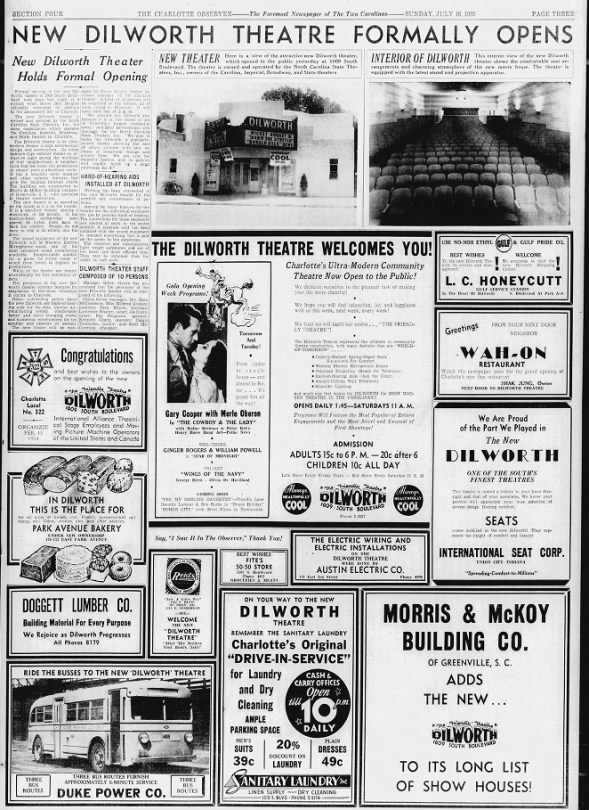