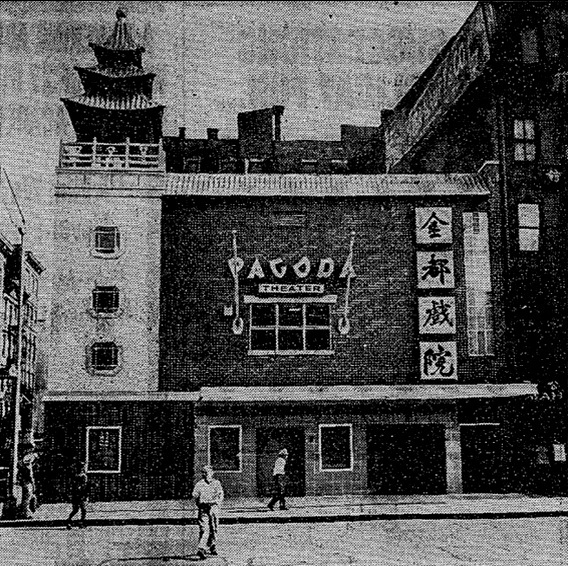 This was one of the newer of the Chinatown theaters, opened in 1964, and suprisingly one of the first to close, in 1992 and was afterward torn down.

I believe the theatre actually opened a few days later, on June 1, 1964, and that the seating capacity was only 492.
Demolished in 1992, the site is now home to the Glory China Tower office building.

Here is a photo of the Pagoda Theater before it was razed.

Here it is again.
View link

Here’s a picture in color of the Pagoda from 6/18/74. My friends father was a part owner and we got tons of free tickets.

Great photo from bassman bobby! Saw my first flick here, “I Want More.” About a concubine that demanded sex from the Emperor. She was accused of a crime, and they forced her to ride a horse with a stick in her vagina, trying to get her to confess. Later, they found the stolen statue in a neighbor’s house…right next to the house from which the statue was stolen.

Wow. I wish that this movie theater have never gotten shut down and demolished. Smh