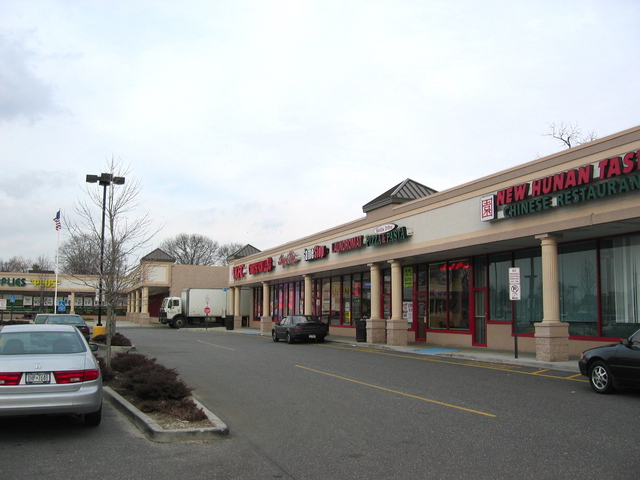 This theater opened by B.S. Moss

Hey Ed… You’re probably right about the two photos (which I took and posted), but at least they indicate where the theater once stood. The street view for this theater is entirely off the mark, pointing the view arbitrarily in some residential block behind Valley Stream State Park! And you are dead on about the Belair being utterly undistinguished! Nothing remarkable about the place at all, at least form a physical standpoint. Believe the last movie I saw here may have been “Doctor Detroit,” in 1983 or so.

I just came across this site while doing research to try to find the date I saw The Dave Clark Five at The BelAir. Yes you read that correctly. They did not perform, they were there to promote their movie, but my friend and I were at the front of the line and got great seats. I may not remember what I had for breakfast these days but that is a day I will never forget.

Hey, thanks for confirming this. My friend was quite confident he saw them there, but most of the reactions on this board were that my friend was wrong. Anyhow, you put this to rest, thank you!

Okay. The facts. My grandparents owned the luncheonette next door to the Belair Movie Theater when they both opened, I believe in 1963 or so. I was only four, but spent many a day there. My grandparents were friends with the owner of the theater and my brother and I would get in for free.

I recall two major events there. One was the premiere of The Batman Movie, where Adam West and Burt Ward both appeared live, to introduce the film. I was obsessed with them at this point, and recall this clearly. The second event that I recall, first hand, and which changed my life, was The Dave Clark Five appearing at The Belair to accompany the opening of their film, “Catch Us If You Can,” also in 1965.

Contrary to what was written previously, the band DID perform. Or, let’s say, they tried to perform. Their equipment was set up on stage and the band came out and played one song, possibly, “Glad All Over,” (I was only five, sorry I don’t remember!). The stage was being guarded by an entire phalanx of policemen, standing in front of the stage, holding hands creating a human barricade. By the second song, the screaming teenaged girls stormed the stage, and the band was whisked off… immediately.

Order was restored, and the movie was shown. Afterwards, I recall a girl, mascara running down her face as she cried and bawled, “I touched him… I’ll never wash my hand again… I touched him…” in my grandparents' luncheonette. My little Jewish grandmother was trying to calm her down, to no avail. It was at that moment I knew I’d end up working in Show Biz, in one way or another. I also ended up shooting many rock bands that I grew up listening to. Never the Dave Clark Five, though 😢 If inclined, you can see some of my work at: www.jbloomrosen.com

The Belair originally opened as a single screen cinema with 600 seats on June 26th, 1963. Located in the Belair Shopping Center, it was built for B.S. Moss Enterprises at a cost of $250,000, according to a report in Newsday. Films were first-run for the area, starting with “Divorce Italian Style.”

Would be nice if someone could find and post a photo of the theater.

The Belair was designed by Louis Liberman, with John J. McNamara as consulting architect, according to a news item in the 7/01/63 issue of Boxoffice Magazine.

NY daily news listings ended in 1981 and show that it was split into two screens in 1976.