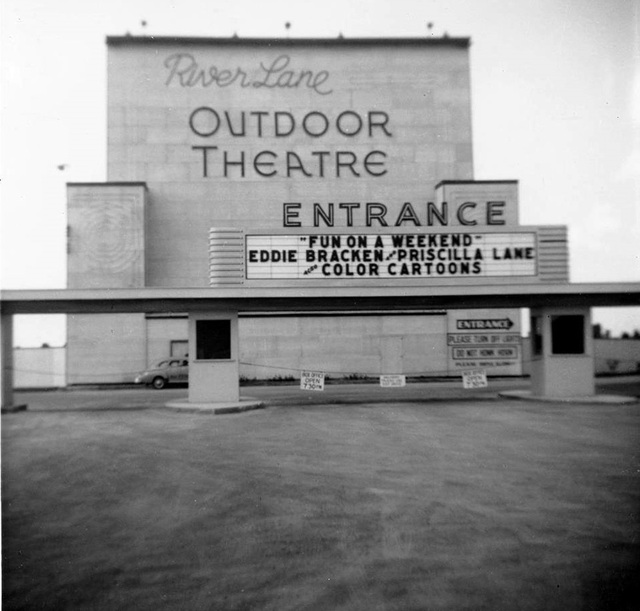 Thanks again Mike,if you ever lose that book you will be in trouble.

I was telling someone the other day,PatricaNC,I think. that I have seen on Cinema Treasures that you can buy a Almanac.Heck,I think I gave one to Nick,See if he will sell you his,Knowing Nick, He might give it to you.

I think you can look them up on the internet I am going to try today to see what I can find.Now back to the River Lane Outdoor Theatre.

I wish my Almanac had walk-in Theatres too,but I only have Drive-ins I would love to have movie theatres more so than the Drive-ins,I wonder if every other year they went back and forth?

I found an ad (May be the grand opening ad) from July 12th, 1948 and an aerial of the River Lane outdoor.

I worked At the Riverlane for 3 years, was great times. The tower was where all the supplies for the consession stand were stored.

The address above is incorrect. This theater was located further west. On the other side of Industrial Ln look for the white building.

A more accurate address for this theater is 970 River Ln, Loves Park, IL 61111. This points directly to the entrance road.

I found the true Grand Opening ad in the Rockford Morning Star, indicating that it opened May 29, 1948. The opening program was Hold That Blonde! starring Veronica Lake, two cartoons, and the short Unusual Occupations.

More notes: “The River Lane Drive-In in Rockford, Ill., has been opened by the Riverlane Amusement Co. The company is controlled by the Schermer family of St. Louis.” —BoxOffice, June 26, 1948.

The 1948-49 Theatre Catalog listed the River Lane Outdoor, Highway 173, capacity 650, Exec: Manne Shermer, Riverlane Amusement Corp. For the 1952-56 Catalogs, the Capacity had gone up to 690 and the Riverlane exec had changed to Bill Dubinsky.

Boxoffice, May 1, 1948: “ROCKFORD, ILL. – The contract for construction of the 800-car drive-in in the Lover Park area of Rockford has been awarded by the Riverlane Amusement Corp., controlled by Mannie Burdie and Sidney Schermer of St. Louis. Work has progressed about 30 per cent. The theatre was designed by Leo F. Abrams and is scheduled to open May 30. It will cost well in excess of $100,000.”