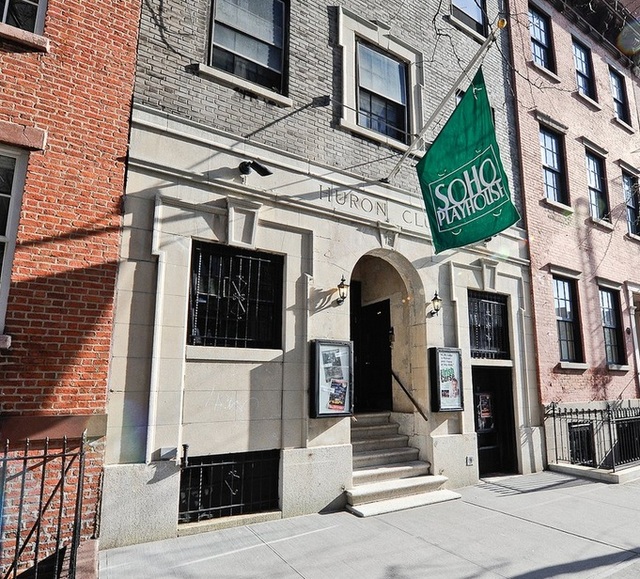 In the waning days of the legendary uptown Thalia Theatre, owner Richard Schwarz opened this second location. He was hoping to establish this theatre since the lease was running out on the original one. After he passed away, former Bleecker Theatre owner Jackie Renault had this for a short time calling it Le Cinematographe.

Just wanted to clear up a few things about the Thalia Soho that were posted here. I co-managed the theater for a very brief time in the Fall of 1989 and was also one of the projectionists. I can tell you at that time, the theater had 2 16mm projectors side by side. Most times, the prints would be built into one reel, but depending on how rare the print was (a lot of them came from Richard’s personal collection) we would have to go in and do reel changes.

I was literally given one session of tutoring on the projectors before I was left on my own to take care of things. I used to go to classes in the morning (I was at NYU at the time) then come down and work at the theater in the afternoons and evenings. Perhaps some of you out there remember me. i was the kid with floppy hair who was constantly screwing up the reel changes (CONSTANTLY) and many times, I’d burn the film in the gate. Oh yes, you’d be watching The Wild One or A Streetcar Named Desire and all of a sudden, the picture would burst into flames and bubble and I’d have to quickly and frantically splice it back together in the projection room while angry mobs yelled and cursed me.

The theater was literally the first floor of a walkup apartment building and the marquee was triangle shaped. Every couple of days, we’d have to change the films, rotate the posters, etc… You would walk in the front door and the box office (and the manager’s office) would be to the left, a few feet forward would be the projection booth on the right (teeny) and straight forward would be the theater.

Opposite the projection booth was a winding stairway that took you down to the bathrooms, a very small lounge and the snack bar. I remember we had a non-working popcorn popper that just kept things warm and we had bags and bags of already popped, heavily salted popcorn in the back storeroom. I also remember throwing out several bags that had been invaded by rats, even though Richard would yell at me if he saw popcorn in the garbage.

One night, we were on the last showing on some very obscure noir film (can’t remember the title). I was by myself and I had just done the final reel change and went downstairs to clean the snack bar so I could leave as soon as the movie was over. About 15 minutes later, I hear this ungodly crash and I go running up the stairs, only to see the take up reel rolling down the steps toward me, film flapping everywhere. I had forgotten to tighten the take-up reel arm and the reel, having gotten heavier and heavier, fell off the projector. Well, the rest of the reel was trashed, just ripped in two length-wise. There was no repairing it. The small audience was ready to stone me alive. Kevin Seal, who was a VJ on MTV at the time, used to frequent the theater and happened to be there at that screening and saved me from being ripped in two, length-wise. I had to give free passes to everyone and tell them how the film ended.

My staff and I did have fun, though. We used to stay at the theatre on Saturday nights and have all night screening parties for ourselves after we’d close. We could never watch the films while they were normally playing, so it was our only chance to see some of them.

I remember Richard as being incredibly unpleasant. He was a very nasty man. His lover (an incredibly sweet guy) was always with him and made countless excuses for his behavior. He didn’t treat him too well, either, so I suppose we couldn’t expect him to be nice to us.

On Friday, he fired the whole staff (three of us) over the phone. I wish I could remember why, but I know it was something he thought we were doing wrong that we weren’t. I do remember he was always accusing us of stealing from him.

I didn’t realize he’d died so soon after. He had an amazing movie poster collection in the basement. Really rare stuff. I hope it went to a good place.

I believe that this theatre opened in 1983, possibly with Berlin Alexanderplatz.

I remember seeing a Woody Allen DF (I believe at this theatre) back in 1987. The description seems accurate.

I went to the Thalia Soho’s opening night and saw “Mr. Arkadin.” It was part of a double feature, I think, but I’ve forgotten the second picture. Great atmosphere. Thought/hoped this kind of place would be around forever.

Reading your story is exactly they way I perceived things. I was the manager/ projectionist in 1988 in the Thalia Soho. I wonder if we know each other. I remember Richard advertising special editors cut movies, that turned out to be the regular version when I played them. Angry mobs would be out for blood at the box office. There was a friendly Indian guy who also managed. His name was Hari. Wonder what ever happened to him.

In 1986, this theater screened the United States theatrical premiere of Dario Argento’s INFERNO. It was a 16mm print, and the film was reviewed that day in the New York Times since it was the first U.S. showing. It played for a two-day run (a Friday and Saturday). I saw it on Friday. It was awesome!

The Soho Playhouse, once known as the Thalia Soho, has been put up for sale as of September 15, 2017. The theatre along with the apartments above it, are all on the block.

Used to work down the street 1985-1987 and saw “Gilda” for the first time, as well as a Robert Mitchum double-feature (“My Forbidden Past” and “Where Danger Lives”). Always dreamed about (if I won the lottery) buying the theatre and running it as it was then. Thank you, Cinema Treasures, for this great website.

Wow, I completely forgot I commented on this over 10 years ago, and had no idea anyone commented on my comment. Walrax, if you’re still out there, I’m not sure if we ever met each other. I do know the outgoing manager was the one who trained me on the projectors, but I could not say who that was. I do remember Richard advertising different cuts of films to get people to come to the theater and then claiming he was unable to get a certain print. The first year I lived in NYC, he showed The Shining and claimed it was a print with the hedge animals scene (which back then had not yet been debunked as having been shot) and when my friend and I showed up, the place was packed and the line to get in was crazy. There was also a small sign on the door saying they were “unable to obtain” the aforementioned version so they would only be showing the regular version. We were already there so we stayed, and it was still sold out.