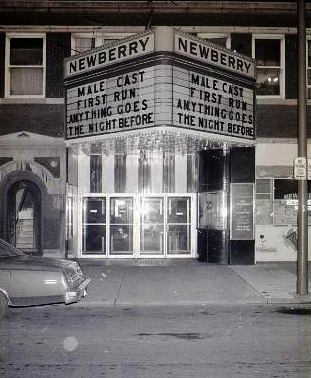 The Newberry Theatre opened in 1914 and had seating for 700. The theatre was located on N. Clark Street at W. Chestnut Street. It was named for its location not far from the famed Newberry Library.

The Newberry was my home-away-from-home on weekends from 1956(when I was 6 years old)until 1960(when we moved). The theater was a leisurely 10 to 12 minute eastward walk from our apartment on the corner of Chestnut and Franklin. It was at the Newberry that I first saw Elvis. Salvaging ‘pop’ bottles allowed me to see every Elvis movie the Newberry featured during that period. The Newberry, alas, gone but not forgotten!

From the Chicago Tribune movie listings on Friday, December 26,1958: NEWBERRY “Prisoners of Casbah” “Battle at Rogue River” Open 1 Elvis Presley “JAILHOUSE ROCK”. Joe- I first discovered the Newberry around 1959-60. Went there off and on throughout the 1960s. Because there was a lack of poster cases outside the theatre, I remember a wooden stand-near the curb,directly across from the front doors. On both sides of this stand three movies could be advertised. On top, 2 “lobby cards”, those 14 by 11 cards; underneath a one sheet. Same set up on the other side. If memory serves, this stand was a deep red.It lasted til around 1965. Another memory: when the theatre switched to X rated fare, a turnstile was installed just inside the front door by the box office. It was about waist high; similar to an old fashioned CTA subway turnstile. This, of course, eliminated the need for a ticket taker.

In 1970 we lived at 863 N. Dearborn. Which is directly across Bughouse Square (Washinton Park), from where the Newberry Theatre stood. You could see the theatre from our front door, but it was non descript and dwarfed by the Jocke Buick lot & signage next door to it.

The park itself is historic as many soapbox debates took place there in the 1920’s. The late Chicago author Studs Terkel would often go to the annual reenactments they still have there.
By 1970 the park was overun with winos & degenerates. There was a structure in the center where a fountain is now, that many would drink & sleep in around the clock. The Salvation Army headquarters was across from the park on Delaware, which is now condos.

At the THEATRE HISTORICAL SOCIETY in Elmhurst, IL, you can see a flyer from January 1969. At this time, the Newberry was changing its program on an almost daily basis. Among the many films showing that week: “HOMBRE”, “MADIGAN”, “MASQUE OF THE RED DEATH” and Elke Sommer and Bob Crane in “THE WICKED DREAMS OF PAULA SCHULTZ”. There is a nice exterior shot- circa 1942. On the marquee: 10c TO 6:30 AFTER 15 “INVISIBLE MAN RETURNS” also “MEET BOSTON BLACKIE”. Under the marquee is the rather small box office, facing southeast. Just to the right is a small poster case displaying 4 lobby cards. Across from the box office- facing north- 2 more poster cases. Above the entrance doors is a 3 line mini marquee. There is also a pic of the lobby-looking west. On the left wall are 6 poster cases; straight ahead is one of the auditorium doors, and what looks like the very small candy counter.

The Newberry Theater was my first time going to an adult xxx rated movie theater. I don’t remember if the movie was displayed on the outside as a gay movie. But once I was inside, wow, there was no question about what was being shown. I took a seat toward the back of the theater. I was followed by a stranger who sat next to me. The guy wasted no time grabbing my knee. I jumped up and moved, but was followed by another guy who sat in front of me. And then an arm reached over the seat and tried to make contact. I moved again and was not sure if what to make of what i was experiencing. I finally must have made my intentions clear, I came for the movie, period! And what a movie it was playing, called “Yellow Zonkers.” It’s actors consisted of a very slender young male and six older guys who took turns, ( three at a time ) having sex with the young guy. I was a little in shock and then another guy approached me. Was I in a theater, or a sex club? But I don’t remember seeing any sex action in the theater. I felt like a hot piece of meat. I again brushed off the advances and got real uncomfortable to see a Chicago Police officer standing in the theaters door, was he watching for action or the movie? I then left the Newberry feeling very guilty. Does anyone know if those xxx movies are available to purchase from that period. The movie Yellow Zonkers movie is the one movie that played a special part in my life, wink, wink.

The Newberry, Oak, and Le image theatres were owned by Burt Ross his brother Joel Ross and their father Edward Ross

There was always an off-duty Chicago Policeman in uniform or plain clothes for security at the Newberry when I worked there in 1971-1972. I never saw any trouble there, but if any of the employees needed to use the bathroom, they were told to use the WOMENS bathroom. I met Joel and Edward Ross many times at the Oak Theatre when I worked there. Joel drove a green Cadillac convertible and would often take the dancers out for lunch in it. Joel always treated the Andy Frain Ushers well. He kept a German Shepherd dog named Major at the Oak. I used to take Major for walks around the neighborhood. There was always a .38 calibre pistol in the box office drawer, and many of the Policemen from the Shakespeare Avenue Police Station would sit in the balcony and watch the 16mm porno “Loops” and the 3 live dancers on stage. Local ordinances required dancers to wear “Pasties and a G-String” on stage, no total nudity in 1972.