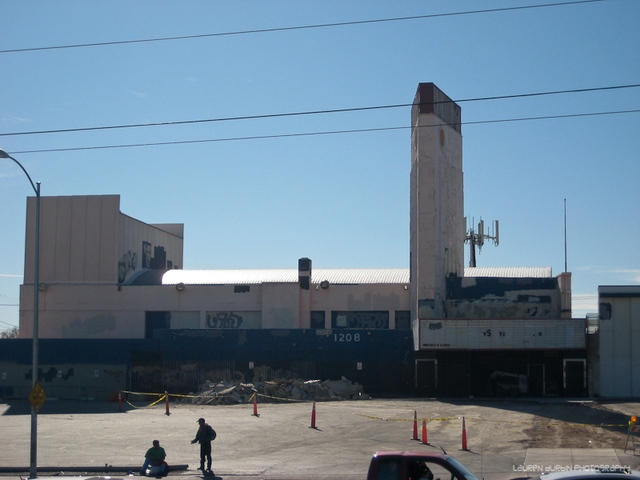 Opened on October 10, 1944 and designed by architect by S. Charles Lee, the Huntridge Theatre was a popular movie theatre for over forty years. After closing in 1977 it was twinned with a dividing wall built down the center of the auditorium. It re-opened in 1980, but closed only months later. Re-opened in 1983, it closed as a movie theatre in 1989.

The Huntridge reopened in 1993 as a concert hall and performing arts venue off of the Las Vegas Strip. The auditorium was restored to a single space, but all seating was removed

The theater was closed on December 31, 2001 and was taken over by an adjoining retail store to be used as storage.

The theater has been rebuilt and at least externally restored, and it reopened as a concert venue for mostly alternative/metal acts in 2002, but closed in July 2004 for ‘remodeling’.

The Huntridge Theatre was placed on the State Register of Historic Places and has a covenant placed on it, that it cannot be destroyed until 2017.

When it was a concert venue, I spent many Saturday nights doing the Dazed and Confused thing, and somehow, always ended up at Cafe Copioh and later at home with a chick.

i went here only a few times as a kid going to punk rock shows. was such a neat place once a upon time and is such an eyesore now when i do pass it. makes me kind of sad actually.

unfortunately, it’s probably been stripped of all it’s copper.

It is so sad this once grand Huntridge Theatre just sits closed and empty all these years in the LV heat and dust. The gambling/hotel resort gang needs to buy It fix It up as a big tourist place and show the movies Viva Las Vegas plus Oceans 11 and all the other movies shot in Las Vegas 24/7. Show on a giant screen with slot machines mixed with seats with a blue light glow. Bring in a Elvis impersonator on the weekends. The place will come alive again with tourists looking to do something nostalgia and different.

Status should be changed back to Closed.
Owner facing litigation again.

Here’s a new 4-page 50th anniversary FIDDLER ON THE ROOF retrospective featuring a roadshow playdate chronology and historian Q&A. The Huntridge’s run is mentioned in the piece.