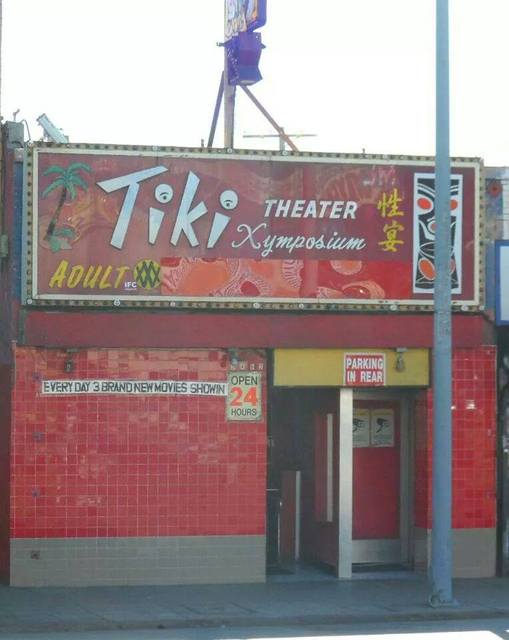 It may also be the last theatre in Los Angeles with a turnstile entrance as well. It was a conversion of a former market and later a liquor store, and has operated as an adult theatre for over 50 years.

To kencmcintyre, re Aug 29, 09 post: That photo is of the North side of Hollywood Blvd just east of N. Wilton Pl. That theater’s address would be 5651 Hollywood Blvd. A home decor store called Mush is located there now. http://www.m-u-s-h.com/

Fred Willard was arrested for lewd conduct last night in Hollywood when police allegedly caught him with his pants down in an adult movie theater … TMZ has learned.

According to law enforcement sources, LAPD undercover vice officers went into the Tiki Theater in Hollywood and found the 78-year-old “Anchorman” star watching last night’s feature … with his penis exposed and in his hand — aka, pulling a Pee-wee Herman.

We’re told Willard was arrested around 8:45PM and booked for lewd conduct.

It was a quick release — we’re told he was out of police custody a short while later.

Willard is best known for his memorable roles in “Best in Show”, “For Your Consideration”, “American Wedding” and “Everybody Loves Raymond.”

According to IMDB, Fred is “rumored” to be in pre-production for a movie entitled … “The Yank.”

For more information on the “experience” of going to the Tiki, see this article which quotes a Yelp reviewer: http://laist.com/2012/07/19/fred_willard_arrested_for_lewd_cond.php

The building the theatre is housed in was built in 1919.

Interesting trivia related to this building: In the mid to late 70’s John Holmes was utilizing 5466 Santa Monica Blvd. as his business mailing address (currently the discount store located next door to the Tiki Theatre, but likely some sort of message/postal box service in Holmes' day).

Would anyone who used to work at this theater be willing to talk to us at Thrillist about it for an article? Email if so!

They’ve raised their prices a little, now $13. There is still a small free parking lot in back, and meters on the street.

Mostly married/discrete guys. Those that are looking for action sit toward the back, those that aren’t sit toward the front. Every knows the game and is cool. Occasionally some drug users, but the last few times I went, didn’t see any. Perhaps the owners have been discouraging that.

This opened as the Mini theatre on November 5th, 1969 with “Studio F”. Grand opening ad posted

Just an update: It’s a 30 seat theatre. Not fifty.

Prior to its' cinema conversion, the building served as a market and later a liquor store.