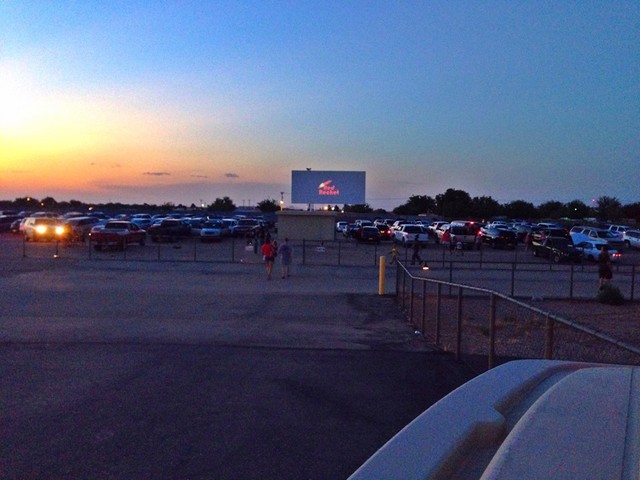 The Fiesta Drive-In originally opened in August 1948, with a single screen and capacity for 450 cars. The massive original screen tower had a mural of a Mexican man and woman dancing, and was animated with neon lighting. Above them was the theater’s name in Streamline style lettering. By 1955 it was operated by Frontier Theatres.

The Fiesta Drive-In closed in 1970, but was completely rebuilt in 1989 as a three screen drive-in with parking for over 600 cars, FM stereo sound, and a modern concession stand. The Fiesta Drive-In was open Friday through Monday year-round, but had closed by 2010. It was re-opened in the summer of 2012 and closed on December 9, 2018.

This is good news! Glad to hear they will be open again. :)

Hello. My wife and I are currently the owners and managers of this theatre. Please see our website at fiestadrivein.com for more information. Thanks for posting about us!

It appears they only show single features.

From their Facebook page: Family owned and operated for over twenty years. Digital projection on all three screens. Full concession menu such as burgers, nachos, hot dogs, fries, pizza and much more.

Closes on December 9, 2018 due to declining business and property sold. Final shows of with The Grinch; Ralph Breaks the Internet; Instant Family.

Can someone get some drone shots of the theater before it closes?

Hello, let me introduce myself, my name is Wayne Yeazel and I’m the owner of Country Arbor Independent Cinema Theatre’s.

Country Arbor Independent Cinema Theatre’s is a small Independent Cinema company that is trying to save our history by buying and restoring our old closed, abandoned drive in theatres and movies theatres that have been closed and just forgotten and left to decay over time. Today there are only 334 drive In Theatre’s left in the United States.

Boxoffice, Jan. 10, 1948: “CARLSBAD, N. M. – Construction of a 570-car drive-in theatre here by Carl Burton, Oklahoma City theatre owner, is expected to start this month. Burton has acquired 18 acres of land for the project. This will allow for future expansion to 1,000-car capacity, he said. The theatre will have RCA equipment and will operate ten months of the year, closing only in January and February, according to Burton.”

Boxoffice, Aug. 21, 1948: “CARLSBAD, N. M. – Victor Farrar, formerly of Chickasha, Okla., has been named house manager of the newly opened Fiesta Drive-In, built here by Carl Burton at a cost exceeding $150,000. The 625-car ozoner was sold to Ray Bartlett of Artesia shortly before the formal opening."

Boxoffice, Aug. 28, 1948: “CARLSBAD – An editorial in the Carlsbad Current Argus took Theatre Enterprises, Inc., to task recently on the occasion of the opening of the Fiesta Drive-In, swank $150,000 ozoner built here by the circuit. The editorial said that the people of Carlsbad were disappointed with the opening attraction at the drive-in, and described the picture as a “10-year-old” film – “so old, in fact, that the actors' and actresses' clothes were out of style.” "

Boxoffice, Oct. 2, 1948: “CARLSBAD, N. M. – Bill Bartlett, city manager for Theatre Enterprises, Inc., owners of the swank new $50,000 Fiesta Drive-In opened here recently, replied to criticism of the opening film with a lengthy open letter to the Carlsbad Current Argus. Bartlett explained that the three first run houses here played current released long before they would be available to the ozoners. He also explained the the policy of the Fiesta was to play the best reissues."

The movie that caused such a fuss was “God’s Country and the Woman,” Warner Brothers' first feature-length film in full 3-strip Technicolor, released in January 1937.