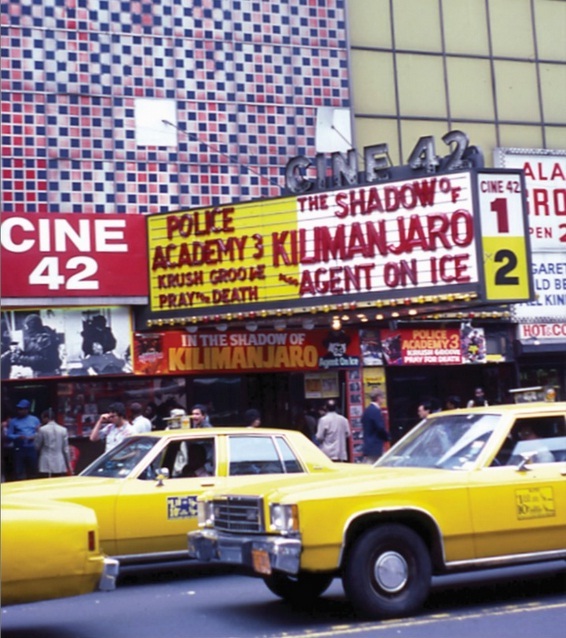 Located adjacent to the New Amsterdam Theatre (west side). The Cine 42 opened as a single screen in November 1974. It was twinned in December 1978. This twin was one of the few houses on the street not operated by Brandt Theatres. Never more then a kung-fu and schlock house, it closed in 1992.

Today part of the building serves as the booking office for the New Amsterdam Theatre.

Ed, I don’t know understand why photos from the area after the theatres started closing are so rare. At least we know that the Roxy near the Empire was already there in 1971 and still there after the Anco closed in 1988. I suspect the Roxy next to the New Amsterdam became the Tomcat/Rick Nelson in 1985, in which case it is already listed on CT.

Yes, Al. I remember seeing that Tomcat/Rick Nelson listing and even commented on it a few years ago. But I didn’t believe it was the site of the Roxy. There is a pic of the Frisco Gay Cinema in the photo section on that page and it appears to show the entrance too far east of the New Amsterdam – indeed they are separated by several storefronts. When Ken Roe added the photo, he offered that the Keystone Bookstore that operated out of a storefront right up against the New Amsterdam was to later become the Roxy. The photo is dated 1978. I seem to recall trying to leverage that information into a possible avenue of research on the Roxy, but it turned out to be a dead end at the time.

And thank you, Mike. It’s been a long while. Went to Europe last summer on vacation and then went through the sale and purchase of old and new residences shortly thereafter. Still not done unpacking – and haven’t set up my computer yet! Moved all of 6 blocks, but might as well have been 600 miles!

Glad to have you back also, Ed. Although the Frisco/Tomcat entrance is further east, my suspicion is that the Roxy used both the Frisco and the two bookstores at ground level and then upper floors as well, since it had three screens. I think they are two different buildings, but odder things have happened on this block.

This is very true. I think it is the same building. If you look at Ken Roe’s pic, there is a shallow architectural ledge above the signage and below the 2nd floor. Seems to me that it runs the length of the entire building, encompassing all of those storefronts. I could be wrong. I seem to recall one of those video peep show emporiums around that spot, and/or maybe a pizzeria or Greek fast food joint east of the Roxy and New Am. Would have been right about where the subway entrance came up.

Great pics! Of course, having never been in the Roxy, I know nothing about the geography of the place, but seems to me the Roxy was a separate establishment from the peep place. And I think the grocery store is where the Frisco Gay Cinema/Tomcat/Rick Nelson had once operated. All part of that same building. Amazing how fluid and transient these storefront occupants were over the years. Just 4 or 5 years before or after these shots and the signage over each entrance might have been completely different.

Good stunt scene outside this theater in the 1980’s NYPD film “Shakedown” Scene, if I recall, is a cop jumping off the marquee on to a motorcycle…

Opened July 24th as a Florin theatre with “The Sting”