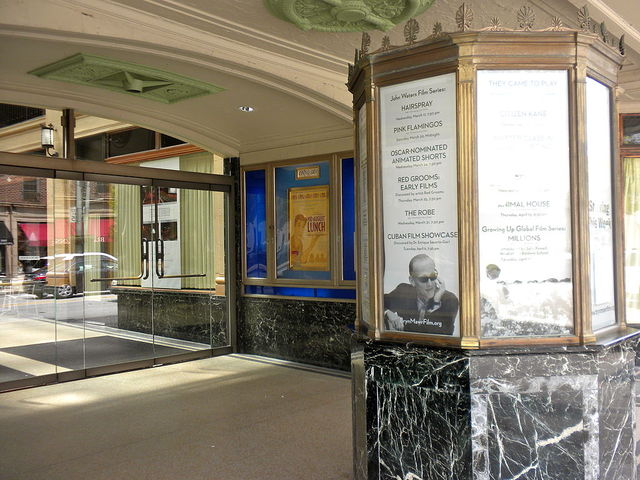 The Seville Theatre was constructed with a Neo-Classical facade and a Spanish Gothic style interior. An ornate, free-standing ticket booth (which survives) led to a spectacular two story glass vaulted atrium arcade lined with storefronts. The skylight atrium led to a foyer, which in turn opened into the auditorium. On each side of the stage, the auditorium had a decorated chamber for the organ pipes. Towards the stage, the front portion of the auditorium ceiling had what looked like wood beams, but were likely made of plaster. The remainder of the ceiling had intricate plaster patterns. The side walls had large draped arches. All 1,006 seats were on one floor.

In 1946, Philadelphia theatre operator William Goldman took over from Fried, and by 1947 renamed it the Bryn Mawr Theatre. The original marquee was replaced by a more modern marquee with huge Bryn Mawr neon letters. The atrium skylight and second floor arcade were concealed by a dropped ceiling. The Gottfried pipe organ was removed in the 1950’s and the original decor of the auditorium was removed or covered up. In the late-1960’s and early-1970’s, the Bryn Mawr specialized in arthouse films. Goldman sold his theatres in 1972 to local movie operator Budco, who in 1978 twinned the auditorium by building a wall down the center.

In 1987, Budco sold their theatres to national theatre operator AMC. In 1996, AMC preferred to focus on multiplexes and did not renew the lease. United Artists Theatres took over. The United Artists (UA) regional manager at the time stated that ‘it would be a shame for such an historic theatre to close’. In bankruptcy, UA ceased operating the Bryn Mawr in 2000. Other Lower Merion theatres operated by UA ceased forever as movie theatres, the Wynnewood becoming a restaurant and the Ardmore being sold and gutted to be a gym. A gym also sought to obtain the Bryn Mawr. Fortunately, local government opposed that reuse. Local movie theatre operator Greg Wax took over the Bryn Mawr, and began a midnight classic series in addition to first run movies. Alarmed at the prospect that the building could still be sold as a gym, local businesswoman Juliet Goodfriend organized in 2002 a nonprofit organization, the Bryn Mawr Film Institute and gathered much support from the Main Line business and civic leaders.

In December 2004, the Bryn Mawr Film Institute purchased the building. The theatre closed, and after a refurbishment, reopened March 12, 2005 with Sir Ben Kingsley cutting the ribbon. In 2005, the theatre was placed on the National Register of Historic Places. Voith Mactavish Architects of Philadelphia worked on renovations. In March 2006, a new marquee, sympathetic to the original marquee, was installed. The marquee was made a little shorter than the original so it would not be hit by vehicles. In 2009, restoration of the lobby arcade was completed after a fundraising campaign to re-install the 400 glass panes of the stunning skylight and restore the paint and plaster to original colors.

The finest arthouse films are shown. One auditorium has 350 seats, and the other has 310 seats. An elevator has been installed to the 2nd floor multimedia room used for film education classes, receptions and community events.

In June 2010, a fundraising campaign was announced to reconfigure the auditorium from twinned theatres to a triplex. However, the next year, the plan changed so that the existing auditoriums would be refurbished and two more auditoriums added in the adjoining parking lot. New auditoriums 3 & 4 opened in January 2014, with their own projection booth, stadium seating, and 163 seats in each. In addition to digital projection, auditorium 4 also has two 35mm projectors. The original two auditoriums were shortened a bit to provide soundproofing and a hall to access the new auditoriums, so seating capacity was decreased from 350 seats in auditorium 1 (at the left) to 285 seats and in auditorium 2 from 310 seats to 247 seats. All screens are configured at ‘flat’ with masking at the top and bottom for ‘scope’ projection. As auditoriums 3 & 4 have screens that are 33 feet wide, that means very large screens for movies that are ‘flat’ or less wide.

I meant to state that it is a different experience seeing films on a movie screen than seeing them via video in your home. I didn’t mean to imply that Center City arthouses aren’t showing the films on a real movie screen-of course they do, and many of them aren’t huge screens either.

Sir I appreciate your reply as well. I understand many of your points also but as a past customer of the theatre I felt I should have a place to air my concerns and complaints. The seats did in fact cut my wifes pants and her leg we did report it and the service was a little under par. I feel that the theatre managment should be made aware of this. The manager we spoke with seemd to not take much notice of the problem and said he would report it to the main office. I never heard back from them. As for the wall in the theatre that is my opinon yes, and perhaps the design is not the fault of the curent owners but what is their fault is the fact that we as members were promised four years ago that we would see our money go to good use within the movie theatres we visit. So far I have not seen this happen. I loved the idea of an indie art house movie theatre in the main line I support that idea. I showed my support by becoming a member.I sat through the opening talks and did not mind the construcion look of the theatre for the first two years. All I am saying sir is that actions speak louder than words when we were promised a new theatre by Mrs Goodfriend that would show in her own words “First run art house films” We belived that and so far four years later things seem to have gotten worse not better. Perhaps I have not seen the bigger picture involved in putting together a movie theatre but on think I do know how to do is run a buisness and one of the first things I learned in operating my own buisness is that the customer may not be always right but dont lie to him or he will never return uphold the promises you make and the rest will follow. I would have been a happy man if the Bryn Mawr had lived up to what it promised as you posted your self above it is the theatre “In Most Need of Improvment”

I go to the BMFI on a regular basis and support what they are doing but have to agree with you on a few points Mainlinedoc. I have noticed that during the winter months you have to layer up, otherwise you will freeze. I have also noted that the theatres have not changed but hope that they will soon. As for the films being “fourth run” I go to the ritz if I really want to see a movie when it first comes out. Finally my suggestion about the plot points being told to you is show up a little late thats my trick to avoid that.

Thanks for taking the time to comment on BMFI. We invite you to contact us directly so that we can help make the theater the best possible theater experience for you.

Not only is it Oscar night in Hollywood on Sunday, it was Oscar night at the Bryn Mawr Film Institute.

The Bryn Mawr Film Institute was the setting for the “Bling Fling,” a fundraiser, and as Juliet Goodfriend, the president of the film institute says, a “fun raiser”:

“We’re celebrating the Oscars which coincide with our fifth birthday, and we’re also selling people’s donations of jewelry, so it’s a Bling Fling. I think we’ll be happy if we raise $10,000 to $20,000.”

The patrons were dressed in long black silky dresses with rhinestones, suits, and some jeans and khakis, but mostly dressed up to celebrate the Oscars and to root on their favorite films.

Beautiful Theatre thanks for the pictures,Guys.

Bryn Mawr, a good Welsh name which means a Large Hill, for all I know there may not be a hill at all in the region, but it was of course named by Welsh immigrant miners, which came I assume from the village of the same name in Wales.

I’ve added to photos 4 of my photos from the Left auditorium of details of original designs on the ceilings & walls, in paint & plaster. Coat of arms in ceiling! Angels in plaster on walls!