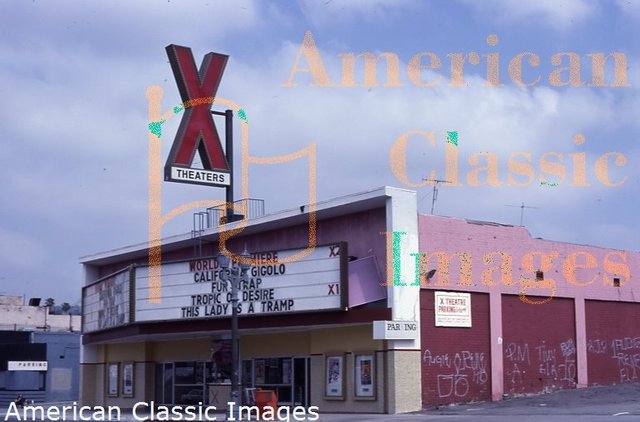 Very interesting history you guys have put together on this theatre,Thanks for the pictures.

There’s a large banner hanging on its marquee reading “FILM CREW BASE CAMP” and a couple phone numbers, suggesting it’s been gutted and rented. But when I googled the words and the address, as well as the two phone numbers, nothing significant, or more importantly, film-related, came up.

I believe the banner is just advertising that the theatre’s large parking lot is available for rental as a base camp (i.e. place to park equipment, crew, and talent trailers) for location shoots. Last I checked, the theatre was still boarded up and neglected.

What are the phone numbers? I can’t quite make them out from the photo and when I called the 213 number it goes to a woman’s personal voicemail. The 323 number has the tree trunk in the way.

Anyway, I might have a client that needs an old theater but can’t figure out who to contact to find out the condition of the interior.

I drove by the theatre this evening (8/20/16). They razed the auditorium, but the facade/lobby has been left intact. I don’t know if they plan on leaving this section of the structure or if it’s simply awaiting a second phase of demolition.

I drove by just last night – yup. The auditorium is gone. facade indeed still intact. I tried to peek in the auditorium space at one time, and do not believe there was much of it left to begin with but it’s still a sad loss. Moreso, they filled the land in, leveling it so that there would be no room for renovations or use of the original space. Damn shame.

The facade is in the process of being demolished.

The building started out as the Holly Food Mart (1937 – c 1950). In the 1950’s and 60’s it served as the offices for Trend Publishing (a precursor to Peterson Publishing). After being converted in to a theatre (late 60’s), it ran as the Adam and Eve for a few years before Carlos Tobalina bought the property in 1974, for $220,000, and rebranded it the X 1&2. Tobalina died in 1989 and his family gradually sold off their adult holdings (the X, Mayan, and Star theatres). Aside from a very brief sublet, for use as a theatre (Johnny Legend’s exploitation film revival series), the building was abandoned/sealed from 1992 until it’s demolition; the property’s value being rental parking and long term development speculation.