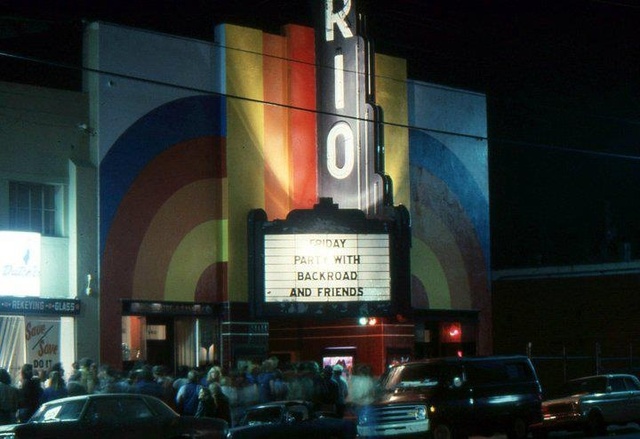 This was a theater located in the town of Rodeo, on its main street (Parker Avenue) in its business district. It opened in 1940. Today, the theater is used as a church while there are many vacant storefronts in the surrounding area.

I think the ad and the photo are not supposed to be linked. The ad date is given as 1944.

There were plans underway for a new movie theatre in Rodeo in 1936, when the October 17 issue of Motion Picture Herald said that Alexander A. Cantin was designing it. As the Rio was not opened until 1940, I don’t know if Cantin’s plans for the long-delayed project were used for the final building or not, but the clean style of the facade, with the strong vertical sign dominating, does resemble (on a smaller scale) a number of other Northern California theatres designed by the firm of Cantin & Cantin during the period, such as the State in Red Bluff, the Orinda in Orinda, and the Uptown in Napa.

I went to the Rio theater once back in the late 60’s to see The Sons of Chaplain, a great rock group. Jerry Garcia was onstage with them, it was a good concert. It was a small theater the stage had pretty red draperies and gold tassles hanging down on the sides. I remember when Larry Singleton was paroled to Rodeo, the residents stirred up a furor, and the news showed the Rio marquee and it said “get out”

What a great story balconyclosed.

In 1968-69 this theater was used to host rock shows. I remember seeing Al Kooper, Michael Bloomfield (recall Super Session LP) with Nick Gravenites. With all the seats removed, this was a great underground scene. There was quite a crowd, so I was hoping that this would turn into something like the Fillmore (SF). Too bad the owners could not continue as a rock concert venue.

The Rio has a new fan page on facebook. Lots of stories of the renovation and then change into a nightclub. http://www.facebook.com/groups/139411666175412/

celaniasdawn, Would like to discuss the Rio Theater with you. Please contact me at slipnut01 at gmail dot com Here’s some info and images of the Rio Theater: http://jerrygarciasbrokendownpalaces.blogspot.com/2012/06/rio-theatre-140-parker-avenue-rodeo-ca.html

The photo shown on the first page is not the Rio. I uploaded one taken in the late 70’s when it was a rock club. I grew up in Rodeo and went to movies as a kid. I saw Bambi there, and Jungle Book. It was a beautiful piece of Art Deco architecture, and I’m sad it’s gone.

I was involved in the reopening of the Rio in around 1974. It was somewhat vandalized but all the equipment was intact; it even had the gear to run 3-D movies. I helped the guys get going but it wasn’t viable as a movie house so they started using it as a music venue.