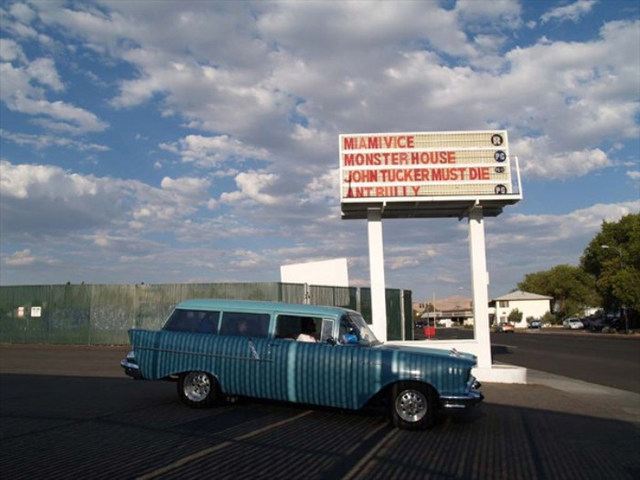 The El Rancho Drive-In opened August 19, 1950 with Dana Andrews in “My Foolish Heart” & Armand Denis in “Savage Splendour”. Opened as a single-screen drive-in, over the years, it has grown to four screens. There is parking for over 560 cars and FM sound. In 1973 the drive-in was taken overy by Syufy Enterprises, later operated by the Century Theatres chain. The El Rancho also hosts a swap meet.

It is now operated by the West Winds Drive-Ins chain.

After all these years, this is still a fun place to visit! I worried during the mid 80’s the place would close. Still a fun destination on hot summer nights.
The best “Drive-In fare” would play here in the ‘60’s and '70’s. Everything from the “Planet of the Apes” films, horror films, “Swinging Cheerleaders”-type T&A films to the latest blockbusters would play here side by side.
The first film I ever saw, “Jaws”, I saw here in 1975. I visit every summer when I’m in town.
Great place and the projection is good. Nothing but great memories of the El Rancho!

According to their website this drive-in is all digital projection.

There was a long retrospective article in the Reno Gazette Journal this month. Some highlights:

“Tony Pecetti, a bigger-than-life accordionist and entertainment entrepreneur in town, opened the El Rancho Drive-In on Aug. 19, 1950.” He died in 1969. “In 1973, the Syufy Enterprises, now run by brothers Ray and Joe Syufy of San Rafael, Calif., purchased the drive-in.”

In 1993, it was “scheduled to be torn down and turned into a flea market and indoor theater complex.” No mention of how the El Rancho dodged that one.

“The screens, varying in size, are steel and wood, never replaced since first installment, though three were add-ons through the years.”

Sparks wouldn’t approve the walk-in theatre on the property, so they worked hard to bring the Century 14 to Victorian Square. Were it not for that, I’m sure the El Rancho property would have been divided similarly to the Capitol Drive-In/16 had been in San Jose, CA

Opened as a 3 screen drive-in on screen 1 with “The legend of hellhouse” and “Boston strangler” and screen 2 with “The student teachers” and “Class of 44” and on screen 3 with “The last American hero” and “Rio Lono”.

Opened as a 4 drive-in with on screen 1 with “Last summer” and “American graffiti”, screen 2 with “The thief who came to dinner” and “Jeremiah Johnson” and screen 3 with “The day of the Jackal” and “The Sugarland express” and screen 4 with “Rio Lobo” and “The golden voyage of Sinbad”.