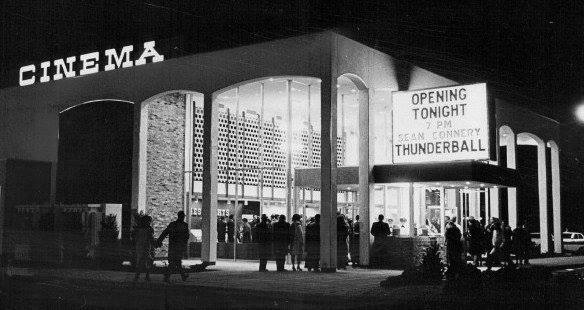 The Villa Italia Cinema opened in December 1965 with Sean Connery in “Thunderball”. I don’t know when it closed, but I believe the entire shopping center has been demolished.

I remember watching How Shoot Roger Rabbit there in the summer of ‘88 while on vacation in Denver. If I remember right it was a twin screen theater at the corner of Alameda and Wadsworth. Seems, as though the auditoriums had a center aisle with seas on each side. Also remember the theater having a large screen right in front of the building. With all of the new malls like Park Meadow and Flatirons being built Villa Italia was forced to close it doors a few years back. I think the theater closed well before that, as it seems, as though the trend has been to built multiplexes with several screens, not just one or two. Check out the link at the bottom to see a story by CNN. I think building in the lower right hand corner of the photo in the story is the theater, which if I am correct was owned by Mann (the folks that ran the Chinese Theater in Hollywood). Not sure what ever happened to Mann, but my guess they were bought out by AMC or United Artists.

You are correct…the building in the front of the photo on the CNN story is the Villa Italia Twin. It was built by General Cinemas and became a Mann Theatre in the 80’s when General sold it’s Denver theatres to Mann. It stood boarded up for many years prior to the demolition of Villa Italia.

CINEMA VILLA ITALIA, in its day played with CINEMA CHERRY CREEK, both did very well in there day, GENERAL CINEMA opened them and later spite both as twins, another poor spit of G.C.C. later in a trade, MANN THEATER took over, I was division manage for G.C.C. but at time of the trade was C.O.O. for MANN THEATERS

Thunderball opened in December of 1965, so that is when this theater would have opened, not in 1967, unless the pic belongs to another theater.

I MANAGED THIS THEATRE FOR A WHILE TWICE. BEFORE THE SPLIT LOVED THE SHAWDOW BOX EFFECT WHICH WAS DETROYED IN THE SPLIT. HATED REPAINTING THE AUDITORIUM FLOORS EVERY MONTH DUE TO THE CLOR NOT BEING SEALED IN THE CONCRETE AT CONSTRUCTION