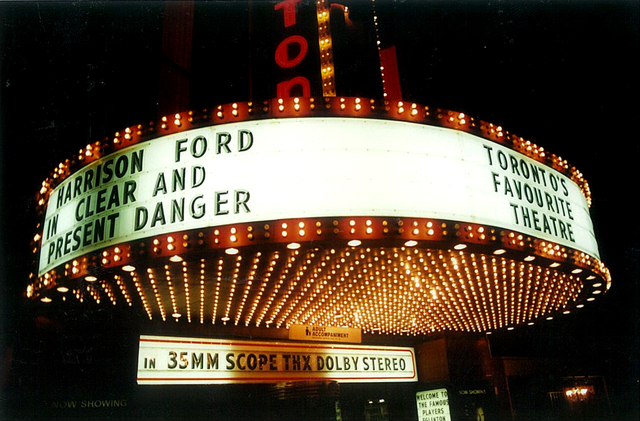 Designed by Kaplan and Sprachman, the Eglinton Theatre was opened on April 15, 1936 with Jack Oakie in “King of Burlesque”. It was operated by Famous Players throughout its cinematic life.

After the Ontario Human Rights Commission fought and won a lawsuit to make it wheelchair accessable, Famous Players decided to close this beautiful Art Deco style theatre in 2003.

The Eglinton Theatre has now been renovated into a rental hall for banquets and special events and has been renamed the “Eglinton Grand.”

A favourite of mine when I worked as a projectionist and also as a movie-goer. The Eglinton’s magnificent auditorium is somewhat similar to the Zigfeld in New York (where most of NYC’s world premieres occur). Massive screen, and the best THX installation in the city by far.

Before the THX work was done, the booth had the most unique machines in the city – Bauer U2’s. Big old German workhorse 35/70mm projectors that put a picture on the screen and nailed it there. I forget what bulbs they were running (4.5kW @ 150A, IIRC), but the gates needed to be water-cooled, not unlike a drive-in! The few times I worked there it was after the Bauers had gone and, IIRC, were replaced by a pair of 35/70mm Simplex XLs running 6000' reels.

The Eglinton was also, for several years, a Cinerama movie house. The Cinerama technology required adjustments to the house and removal of several rows of seats but it did successfully in showing Cinerama product.

This theatre is quite near to my heart, I attended the Canadian premiere of the first Harry Potter movie there as a 10-year-old in 2001. It was the first one-screen cinema I had ever been to. What a shame it’s no longer operational.

I enjoyed reading about the theatre, I was looking for information on it. My parents met while working there 50 years ago. We are planning a 50th anniv. celebration and I was looking into some of history. Does anyone know if there is a way to find out more? Thanks.

Here’s an article from a few days ago published in the Toronto Star that some may find of interest. The Eglinton and other Toronto cinemas are mentioned (and some might recognize a Cinema Treasures contributor quoted in the piece).

We Torontonians like to think of ourselves as visionary sophisticates, the kind of people who would prefer to boldly reach for the stars, rather than doggedly climb every mountain.

Our choice of favourite movies suggests otherwise. I thought I was on safe ground last week when I declared 2001: A Space Odyssey to be T.O.’s all-time most popular cinematic experience, going by what two sources (and personal memory) indicated was a four-year run at the old Glendale theatre on Avenue Rd. I believed that to be the longest a movie has ever played in one theatre in the city for a continuous run.

Tim Elliott, a Toronto movie buff and collector, contacted me with a contrary assertion: The Sound of Music edged 2001for popularity honours. The Sound of Music, a musical in which Julie Andrews and Christopher Plummer climb every mountain that love, geography and the Nazis hurl at them, played for 144 weeks at the Eglinton Theatre, which still stands but no longer operates as a movie house. The film made toes tap and tugged at heartstrings at the Eglinton from March 10, 1965 to Dec. 21, 1967.

A few months after The Sound of Music closed, 2001: A Space Odyssey opened at the Glendale theatre on Avenue Rd. The outer space adventure billed as “the ultimate trip” seared eyeballs and dazzled brains there for a total of 127 weeks, roughly 2.5 years, from May 30, 1968 to Nov. 3, 1970 — and it screened in the widescreen marvel known as Cinerama, no less. The Glendale no longer exists, sadly, having been demolished in the 1970s and replaced by a car dealership.

“These were both the longest single engagements in the city, as far as I know,” Elliott, 62, told me via email.

He bases this on his study of movie ads in the Toronto Star and other newspapers, “a hobby of mine since seeing my first grown-up film Breakfast at Tiffany’s in 1961 as a kid and falling in love with Audrey Hepburn and the movies and movie theatres.

“In my basement I have file drawers filled with the movie ads from all of the Toronto newspapers from the ’60s on. I also used to keep lists of most of the theatres of Toronto and write down each movie that played in each one and how long they played. Unfortunately, I misplaced those lists during a move and haven’t seen them in years.”

But he managed to keep a lot of stats on movie engagements, including these other long runs in Toronto:

There have also been long engagements of close to a year or more for the original Star Wars, Oliver!, Those Magnificent Men In Their Flying Machines, The Gods Must Be Crazy and La Cage Aux Folles, among others. Note that these achievements were all notched mainly during the 1960s and ’70s, before the widespread adoption of colour TV, multiplex theatres and home video. Then came the Internet and VOD (video on demand), which changed things further still. Most of these records also precede the blockbuster era, where it became commonplace to open a movie at many theatres at once, rather than have it take up residence in a single prestigious theatre for a “road show” run. It’s almost impossible now to think of movies having a lengthy run in a single Toronto theatre, although there are exceptions. Avatar ran in the Scotiabank theatre for nearly six months, from Dec. 18, 2009 to May 27, 2010, and it remained in the Toronto market at least until June of that year, says Cineplex spokesman Mike Langdon. He adds there’s nothing to stop a film from setting a record. “For us, we will leave a film on screen as long as there is demand from the guests to see it. Our guests determine how long a run actually is.” I recall that Titanic also had a very lengthy run in Toronto, perhaps as long as Avatar, both films having been directed by Ontario-born James Cameron. Cineplex doesn’t have ready access to screening stats, and neither does Paramount, the studio that released Titanic. But the intrepid Astrid Lange in the Star’s library found that it played at the Uptown theatre from Dec. 19, 1997 to June 30, 1998. It moved from the Uptown to the Uptown Backstage on July 1 for another few weeks. Sad to think that most of the single-screen theatres where records were set are now demolished or otherwise unavailable: Uptown, University, Odeon Fairlawn, Nortown, Hollywood, Eglinton. All gone. It comes as no surprise that all of these movies are mainstream crowd-pleasers, although 2001: A Space Odyssey also qualifies as an art house head-scratcher. But three of Toronto’s all-time favourites are space movies: 2001, Avatar and Stars Wars. So maybe we’re visionaries after all.

@PeterD – The 35/70MM Bauer projectors were removed in early December 1981 in favor of the 35/70MM Simplex machines. The Bauers used carbon arcs, that’s all I know about them (I helped carry dozens of boxes down for pickup after the projectors were removed!). “Raiders of the Lost Ark” (70MM) was the last film to use the Bauers, and a gorgeous, bright, steady picture on that screen it was. Closed for four days the Simplex’s were installed for the 35MM engagement of Warren Beatty’s “Reds” (mono too). The first workout for 70MM came the next summer with “Poltergeist”, and there was not enough light on the screen as the xenon bulbs were an insufficient 2500watts. The best picture they could get was by focusing the bulb for max. brightness and allowing for a bit of flicker in the corners of the picture, which could really only be noticed in bright scenes. It drove us all crazy but I don’t recall anyone complaining. A 70MM film festival of old classics did yield complaints about the lack of light on the screen, plus some of the films were badly faded (Dr. Zhivago etc.) The lamphouses and xexon bulbs were finally upgraded to 5000watt bulbs in 1984 when THX was installed at the Eglinton.

“The Sound of Music” premiered here fifty years ago today. With a reserved-seat run of 146 weeks, I imagine it’s the long-run record holder for this venue.

I believe the Bauers from this location where the ones that were shipped out to Vancouver in which were used as parts machines for the ones installed at the Paramount in New Westminster in BC. They never did run 70 again.

How big was the screen at the Eglinton?