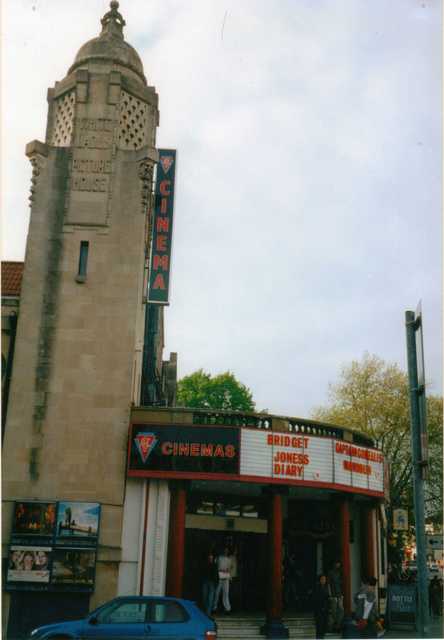 Located in the Clifton district, close to Bristol city centre. The Whiteladies Picture House opened on 29th November 1921 with Mary Pickford in “Pollyanna”. The original seating capacity was for 1,314 in stalls and circle. The building retained part of a nunnery, which used to stand on the site. The early-Art Deco style cinema still has its original ballroom, which doubled as the luxurious Rendezvous café-restaurant which had 53-seats.

It was taken over by Associated British Cinemas(ABC) in August 1929. In 1957, it was closed for a while, to enable the circle to be enlarged, giving a new seating capacity of 1,411. In 1959, it was modernised internally.

It was re-named ABC in 1965, and in the Summer of 1978, it was converted into a triple screen cinema. Later renamed Cannon, then MGM, it reverted back to ABC in around 1999.

Odeon Theatres, who purchased the ABC chain in 2000, closed this cinema in 2001 and planned on converting the beloved movie house into a gymnasium. A groundswell of public opposition to the new use led to a Public Inquiry which refused planning permission. Over the years, arguments and debates continued over the future of the building which sat empty, awaiting a more suitable use. In January 2015, it was announced that the Everyman Media Group would operated the cinema, and restoration would begin. It re-opened as the Everyman Bristol in May 2016. Screen 1 in the former circle seats 243, Screens 2 & 3 in the former rear stalls seat 85 and 110 respectively.

It has been a Grade II Listed building since 1999.

Did the work to convert to a health club ever actually start?
What’s the status of the cinema now?
The consent for the works to create a health club was granted in 2004 for a period of five years. If work hasn’t started, then the developers would have to reapply.
If anyone knows, could they share that info?
Thanks,
Gary

Gary; The last news I had was in April 2008. The proposals to convert to a healthclub were approved in 2005, but nothing happened. In 2007, another company took over the lease of the empty building and apparently intend to stick with those plans. In addition, a 200 seat cinema would be created on the first floor, combined with a cafe and 180-seat restaurant, where diners can view a film while eating. A banner was put on the building stating that the venue would be known as Jessicas, and would open in early-2008. Again, nothing has happened and the building remains shuttered and empty in September 2009.

Thanks Ken. A google search for health club in Bristol leads to quite a number of them. I wonder if plans like this and similar plans for many other closed cinemas are based on proper business plans. Having read all the planning papers online for whiteladies, any return on investment would be very much over the long term. The developers were talking about reinstating lots of original features (which is a good thing) but in the context of maximising profits, they’d have been better off starting with a bolt together shed..

What’s the future now for whiteladies I wonder?

The style for this cinema was actually Bristol Byzantine, an Ottoman-inspired architectural style unique to the city. But since you have to select a style from a drop-down menu, I suppose Art Deco was the closest of the options on offer.

The current owner is currently applying for planning permission to turn into 5 flats and a gym – you can lodge your objection at: http://planningonline.bristol.gov.uk/online-applications/applicationDetails.do?activeTab=documents&keyVal=LXJ89MDN00J00 until 30 April 2012 – help to spread the word to save this wonderful cinema

Hmm. The Big question remains.. What do you do with it. If it is saved ??? The danger that follows, is a fire.. Like the Clifton Cinema.. The Kingsway.. in Birmingham.. All down to the evils of the multipex. Still we will be seing them start to close soon.

Hopefully, what you do with it if it is saved is run it as a cinema: http://www.bbc.co.uk/news/uk-england-bristol-18705735 Not sure how it is at any more risk of fire than any other cinema? Bijoux independent cinema is having a revival in UK, with Electric B'Ham, The Last Projectionist, etc… I’m feeling more hopeful then ever about saving the Whiteladies Picture House.

Update on planning permission – the decision has been deferred so that Bristol City Council can conduct a site visit later in July. All to play for…