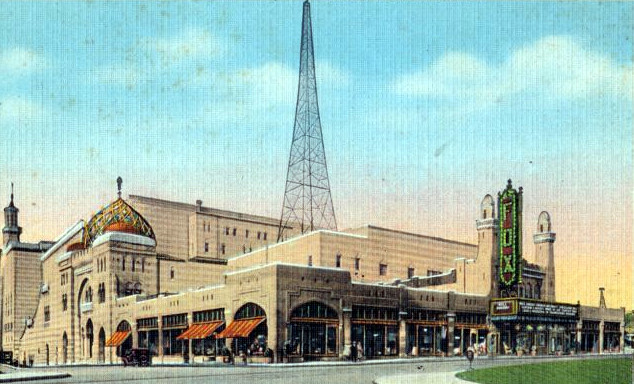 Originally constructed as the Yaarab Temple Shrine Mosque to be used as the headquarters for the Shriner’s organization from 1925. The site was taken over by Fox Theatres chain and turned into the magnificent Fox Theatre which opened on December 25, 1929 with George O'Brien & Helen Chandler in “Salute”. On the stage was a Fanchon & Marco ‘Idea’ named “Beach Nights”. Female organist Iris Wilkins opened the Moller wonder organ. Today, it is one of the best kept, best loved and luxurious of the world’s movie palaces. Its legendary status has been born from initial hardship.

The inauguration of the building as The Fox met with the commencement of the Depression. The Fox Theatre, it seemed, was doomed to fail. After a few short years of delighting Atlanta crowds with films and shows, the Fox Theatre declared bankruptcy and closed.

The city gained brief ownership of the Fox Theatre and the theater regained its footing during the 1930’s, 1940’s and 1950’s. The 1960’s hit the theatre hard like many others around the country. The proliferation of television, suburban attractions/distractions and other economic forces began to take a toll on the viability of the Fox Theatre as a movie palace. The Fox’s glory days lasted until 1973.

A non-profit group saved the Fox Theatre from demolition and in 1975, the group began the lengthy process of restoring the theatre. Reopening the theatre as a peforming arts center, the Fox’s financial situation is now much more sound.

Constant restoration and upkeep have kept the Fox Theatre looking new and have helped retain its status as a truly unique and magnificent theatre. The Fox Theatre is reportedly the only major theatre in the country to have a full-time restoration staff. They are also the only major theatre to have 2 ballrooms attached in the orginal building (this is as it was on opening day in 1929).

I was there in the summer of 1976 and watched Lynard Skynard perform live. And when you listen to Freebird live that’s when he say’s “Play it pretty for Atlanta”.Forrest Gump moment moment of my life, everytime I hear that song I think of the red velvet chairs and the white brick walls and the huge stage and Lynard Skynard playing Freebird and Sweet Home Alabama.

The Fox’s webpage has their technical specifications manual which has a lot of tech details about the theatre and stage facilities, as well as partial floor plans. It can be accessed here:

Proscenium opening is 79 feet wide and stage depth from fire curtain to back wall is 34 feet 7 inches.

Grand opening ad in the photo section and below: 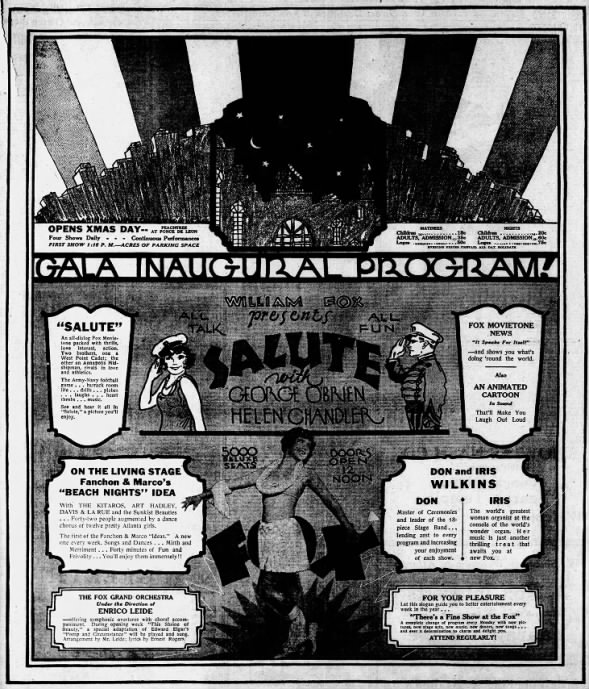 New article out on Atlanta’s large format and roadshow history. The Fox’s numerous Summer Film Festival screenings get plenty of coverage in the piece.

Any news of the new 70mm print of 2001:A Space Odyssey appearing at the Fox this summer?

90th anniversary and highest grossing venue of it’s size worldwide for a decade.

Take a look at this long, detailed and generously illustrated article from CNN

Disney’s “Song of the South” had its world premiere here 75 years ago today.

Some astonishing comments in another section of Cinema Treasures. Doesn’t anyone ever monitor what’s being published here