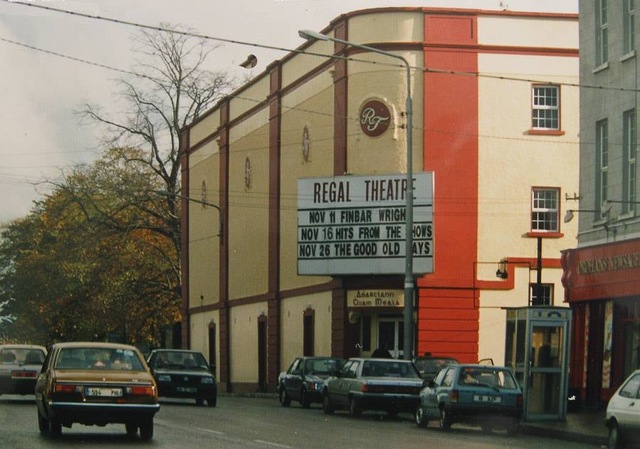 Built on the site of John Magner’s Theatre at the Mall, which opened in 1913 and was destroyed by fire in 1919. It was rebuilt as the Clonmel Theatre, opening on 28th March 1921 with over 1,000 seats. Around 1930 it was equipped with a Western Electric(WE) sound system. In 1968 it was sold to Ward-Anderson they closed it on 22nd December 1968 with Clint Eastwood in “The Good, the Bad and the Ugly”. It was eventually re-named Regal Theatre and was tripled in January 1988. It was closed in 2001, as the owner was unable to either sell or lease the theatre.

The shuttered 850-seat theatre was valued at Euro900,000 but could be sold for over Euro 1million.

A group in Clonmel, Ireland was formed to save the city’s Regal Theatre. Residents tried to urge the city to buy the theatre and re-open it as a performing arts center. Sadly, this was not to be, and it has been converted into retail use.

How may I help?

Passed by the former Regal on Saturday. The building stands, apparently empty with only an advertisment for a furniture retailer on it. That is over the corner entrance. This firm may once have used the premises, as the name is Regal, but this firm now has modern premises behind the former theatre / cinema. The building seems to be in good structural condition, well painted but is firmly locked up, so what it is like internally could not be seen.

The theatre was originally built in 1913, the architect was AOM Lovell, with between 700 and 800 tip up seats, and a stage measuring 30x26. For much of its life it ran as a cinema, with stage use on special occasions.

It would seem cinema use ended around 2001.

The Regal reopened after tripling in Jan 1988 having spent IR£120,000 on the conversion. Pullman seating was for 290,175 and 79. Larry O’Keeffe bought the place from Ward Anderson in 1995 and turned it back into a theatre which closed in March 2001. It is now the Regal Centre and includes the Pet Planet store since October 2012 and Tangled Yarns. O'Keeffe’s furniture store is now at the back.

The previous building had already been known as the “Clonmel Theatre (Magner’s)” when the noted film Knocknagow was shown in January 1918. It was mentioned as being at the rear of No. 35 Gladstone Street so the new one maybe a completely new building rather than a reconstrcution.

Yet more information. Opening date 28 March 1921 sold to Ward Anderson in 1968 and closed 22 December that year with The Good, the Bad and the Ugly. Reopened 1988 as a three-screen cinema as stated above.