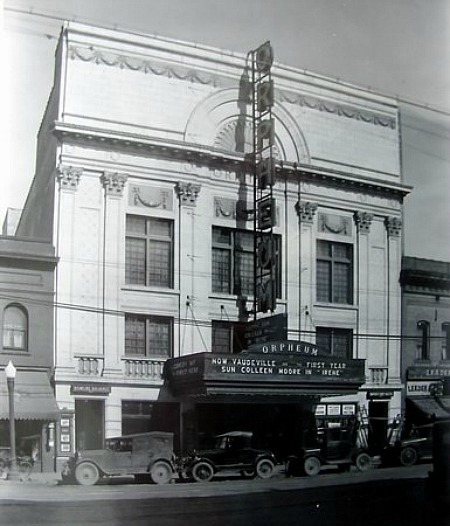 The Orpheum Theatre was built by the Kleist family and opened in 1927. It was called “the queen of the downtown theatres”. The Kleists also owned four other theatres, the Strand Theatre, Eagle Theatre, Oakland Theatre, and the Rialto Theatre downtown.

The Orpheum Theatre had thick plush blue carpeting and overstuffed seating. It also fetured a $25,000 pipe organ. Some other features of the building were the two bowling alleys and billiard room. It had two storefronts, one being a popular barber shop.

The Orpheum Theatre closed in 1955 and was soon demolished.

The 1949-50 edition of Theatre Catalog lists the Orpheum at Pontiac as having been built in 1920. Google Books has only a snippet view of this book available, but I was able to puzzle out from other theaters on the list that it is a list of theaters designed by architect George J. Bachman.

Construction of Kleist Amusement Enterprises' Orpheum Theatre was underway in Pontiac, according to an item in the October 16, 1920, issue of The American Contractor. The item confirms Bachman as the architect, but says that after the steel had been erected, work on the project would be suspended until 1921. There was no explanation why.

I misspelled the architect’s name in my previous comment. The 1949-50 Theatre Catalog, and some period sources including a history of Genesee County published in 1916, which has a biographical sketch of him, spell his surname Bachmann.

The March 13, 1926 issue of The Moving Picture World said that “[t]he new Orpheum Theatre at Pontiac was opened last week and it proved a gala occasion in very respect for A. J. Kleist and his associates.”