Arkley Center for the Performing Arts 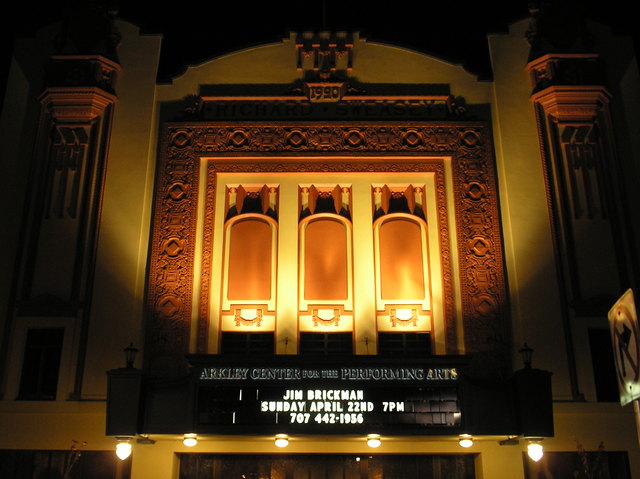 Opened on December 16, 1920 as the Sweasey Theatre, it was taken over by Loew’s Inc. in 1921 and renamed Loew’s State Theatre. In 1929, the interior was destroyed by fire and it was renovated. In June 1943, another fire did some damage and also considerable water damage was incurred. After years as a movie palace, the Loew’s State Theatre was closed in 1973 and was turned into Daly’s Department store.

Daly’s closed in 1995 and was abandoned for over ten years. The local university, Humboldt State, looked into using it for performing arts but finally backed out, possibly because the building required too much work. Its decaying state became something of an eyesore.

It was purchased by the Arkley’s in 2003 and renovation/restoration work began. In 2007 it was re-opened as the Arkley Center for the Performing Arts.

Local conservative rich philanthropists Rob & Cherie Arkley have bought this theater and have almost completed the restoration apparently. They are saying that the theater will open in 2007 under the new name “The Arkley Center for the Performing Arts”. This theater was christened the Richard Sweasey Theater theater after the mayor of Eureka of that time. The theater is rightfully called “The Richard Sweasey Theater” and will be forever.

By the way, more information can be found at www.arkleycenter.com They were handing out informational brochures about their restoration at this month’s arts alive.

Richard Sweasey was the mayor of Eureka in the 1920s.

This theater is now completely (to its mostly former glory) by the Arkleys. Go to www.arkleycenter.com for more info. It is now open and is a performing arts venue.

This theater reopened on Friday night, February 2 with a sold out performance by Kenny Rogers. The next day the theater opened for an open house for the community which included tours, live music and food. I was on the first tour of the afternoon and we were shown the entire theater from the green rooms to the kitchen to the backstage area, bathrooms, and the catacombs under the theater. The theater currently does not have a projection booth and is intended for live performances but we were told they will be purchasing a digital projector.

I have a January 1925 program from this theater, which can be seen here.

You can see the back of the building here.

You can see the front of the building here.