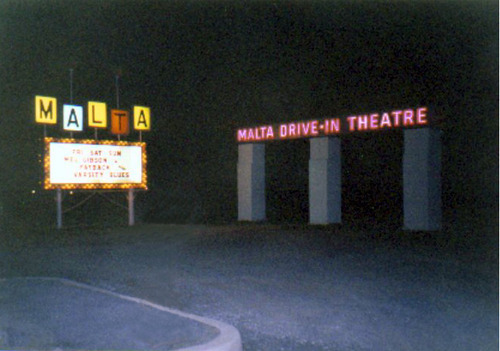 The Malta Drive-In opened in 1949 and is still open today. It advertises a capacity of 550 cars and shows first-run movies every weekend. On July 1, 1949 the Malta Drive-In premiered with the Abbott and Costello film “The Noose Hangs High” and Roy Rogers and Trigger in “The Old Spanish Trail”. A second screen was added in 2008.

The Malta added a second screen in 2008. It converted to digital projection during the 2012-2013 offseason. The Ballston Journal interviewed co-owner Edward Caro about the switch in March 2013.

The Malta has its own historical marker out front, erected by the city of Malta in 2007. It reads: Malta Drive-In Signs / Open-air theater started in 1949 by Sarto and Leona Smaldone, drive-In purchased in 1988 by brothers Ed and Tom Caro, in operation for over 50 years.

Why the name Malta?

The second opening feature was “The Old Spanish Trail”.