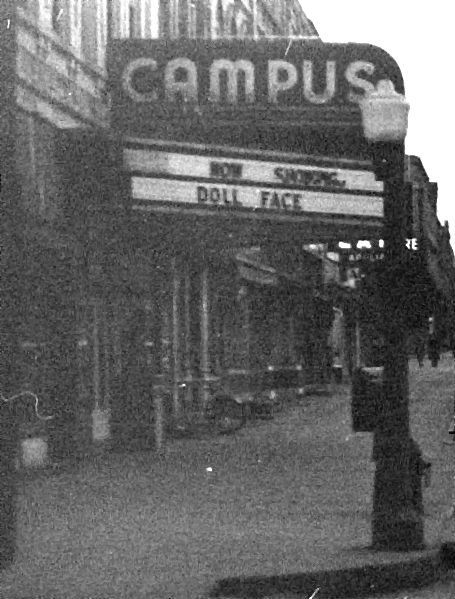 Located in downtown Ripon, this single screen is located on Watson Street and E. Jackson Street. It opened in November 1935, operated by Marcus Theatres who still operate the Campus Cinema today. It plays first run features with two shows nightly and matinees on week ends.

Ahhh, I know this theatre well. My grandfather, Floyd Smith, managed both that and the Ripon Outdoor Theatre sometime in the early to mid 60s. I really don’t know the exact time period he managed it but I heard his daily schedule in the summer went like this. Open and start up the indoor theatre, then run out, open the outdoor, come back to the indoor between showings, check things over, do the 2nd showing, close the indoor, then go to the outdoor and close that up for the night. Crazy schedule!

Around Town With John Bailey: Campus Cinema: first Marcus Theatre entertaining the community of Ripon for over 74 years
By: Jonathan Bailey
Posted: 11/3/09

Nearly three-quarters of a century ago, a 23 year-old entrepreneur named Ben Marcus was searching the states of Minnesota and Wisconsin for an area to open a movie theatre. His journey led him to Ripon, Wis. where he noticed a building that was being vacated on historic Watson St. He invested $15,000 to purchase the building and the rest has become history.

Fifty-four theatres and almost 700 screens later, Marcus Theatres has turned into one of the leading entertainment industries in the country.

The original, Campus Theatre, opened its doors Nov. 1, 1935 for a showing of “It’s in the Air”. The movie, starring Jack Benny, cost 25 cents, and the opening of the theatre was quite a sight.

“Ripon was the most exciting opening I have ever seen,” says Ben Marcus' wife Celia Marcus. “The workmen were on their way out the back door and the people were all lined up in front. They could hardly wait to get in, and that’s the way it kept up for weeks and weeks. They were really hungry for a theatre.”

The lack of theatres in the area of Ripon was one of the prime reasons that Ben Marcus decided to open up the one in Ripon. “It was a town that really didn’t have a movie theatre back in 1935 and he thought the student body population and the people living in the area could use [one],” says Marcus' son Steve Marcus, current Chairman of Marcus Corporation.

The only other theatre in the town was a small auditorium that also served as a drill site for the National Guard.

The Campus Theatre was highly successful as Ben Marcus managed to pay off his debts within a year. Six years later, six more locations were opened up as the chain quickly began taking over the state of Wisconsin. Currently, Marcus Theatres spans throughout the Midwest. Besides Wisconsin, there are locations in Iowa, Illinois, Minnesota, North Dakota, Nebraska and Ohio.

In 1985, the Marcus Corporation remembered their roots as they celebrated their 50th anniversary by returning to Ripon. The anniversary saw a replaying of the original film, “It’s in the Air”, and featured Ben Marcus as the parade marshal for the annual Riponfest Parade. Ben Marcus was also honored with a plaque in the main lobby of the theatre.

Ben Marcus never took any success for granted and was always looking for ways to diversify. It is lesser known that Marcus played a large role in the founding and the operation of Marc’s Big Boy Restaurant’s, Kentucky Fried Chicken (KFC), and a number of hotels.

Now known as Campus Cinema, the one-screen movie theatre is a rarity. In fact, the Ripon theatre is the only Marcus Theatre to have one screen, with the next closest having six screens. With only one screen, current General Manager Tim Burns is faced with many challenges and restrictions.

“Unfortunately just being our size, we tend to be the last one in line for some of those independent releases.”

Other challenges that Burns is faced with includes the fact that once they get a new movie in the theatre, it must remain for a set period of time, regardless of the success.

“In our particular case, we have been in the theatre for so long that it is all paid off and it allows it to operate and make a small profit, even though it has only the one screen,” says Steve Marcus. “Then we’re challenged because we always have to try to pick the movie that will be appealing to our customers in Ripon. On the other hand, Ripon is as diverse as every other place.”

While small in size, Campus Cinema will be one of the many to have a midnight showing of the “Twilight Saga New Moon”, Nov. 20.

This will mark only the second midnight showing in Burns' time at the Ripon theate, with the previous being a Harry Potter movie.

The “Twilight Saga New Moon” will be the second consecutive opening of an anticipated movie, as “A Christmas Carol”, starring Jim Carrey opens this weekend.

To get the showtimes visit http://www.MarcusTheatres.com

The marquee sign which draped over the Watson St. sidewalk for over 50 years has been replaced with a flat sign reading ‘Campus Cinema.’ This may once again change under Burns, as the theatre is in the preliminary stages of finding out the feasibility of returning it to its original form.

“Steve Marcus actually visited here in the spring and he looked at the sign and he just really loved the old-style marquee sign,” says Burns. “If it does happen, it would probably be in the spring. They really want to make it look like it did 75 years ago, at least the best that they can.”

When asked about plans to return to Ripon in November of 2010 to celebrate 75 years of Marcus Theatres, Steve Marcus replied, “I am not sure. We have a committee working on putting together all of the things for the 75th and I am not exactly certain what their plans are.”

While the plans for the 75th may still be in the works, the love that the entire family has for Ripon is evident. “The Ripon theatre is our company and family shrine,” says Steve Marcus. “The theatre is a constant reminder of our rootsâ€¦we have always had a keen sense of our history and Ripon’s been a wonderful place to do business.

Campus Theatre, 103 Watson Street, Downtown Ripon.
Built by A.W. Pettibone in 1872 for his dry goods business, later in the nineteenth century the block was split into two stores, a dry goods house and a drug store. During the turn of the century years, the dry goods store was operated by the Mattice family and the drug store by Ottmar Schallern. By 1909 the building was again combined to house the Mattice-Foster Company Department Store, one of Riponâ€™s larger department stores. The business was in operation until 1935 when Ben Marcus established the Campus Theatre, the first of many in his movie empire that stretched across the Midwest.

The Marcus Corp. of Milwaukee plans a year-long celebration with a variety of activities to commemorate its 75th anniversary including a Ripon Campus Theatre celebration. The company in Ripon. To highlight this significant achievement, the company will make interior and exterior enhancements to the theatre. Throughout the year, the company will be offering special promotions for customers in celebration of 75 years in business.
The company was founded in 1935 by Ben Marcus with the purchase of this single movie theatre in Ripon and is in its third generation of Marcus family leadership. Stephen Marcus, the son of Ben Marcus, is chairman of the company and the father of Gregory Marcus.

A new marquee has been installed in time for the 75th anniversary celebration
Youtube: View link

An article about the theater’s seventy-fifth anniversary: View link

Thanks CWalczak for another great piece of reading.