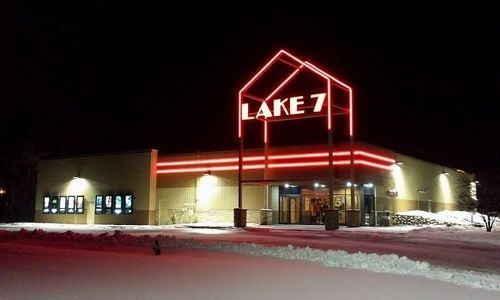 Built on the site of the 53 Auto-Vue drive-in. The Cine 3 Theatre was opened by Carmike in 2000. CEC operates the Lake 7 Cinemas, showing first run features twice nightly with matinees on weekends, holidays and summer months. The Lake 7 Cinemas has a nice sized lobby but the auditoriums are rather small. Stereo sound in all auditoriums and comfortable seating.

Helllo all! Just found this site! In Rice Lake, WI there was a single screen in the downtown area many years ago. A drive-in then opened where the Lake 7 currently is; don’t know the exact opening date. The Cine 3 was built on the site of the closed drive-in in the early 1980s by Kerich (sp?) theatres. The 3-plex was then sold to Carmike. Carmike started dumping a bunch of smaller theatres after their bankruptcy in the late 90s/early 2000s. CEC acquired the theatre in 1998 and expanded to 7 screens.

Mr. Bigred89… you have some strong opinions… when is the last time you visited the Lake 7?

What has changed,jesterraceif,seems like according to Bigred89 this must be the worst theatre in the whole state,Can’t believe the did not refund or give his uncle a pass for another movie,At GCC we had special rainchecks only to be given out under rare circumstances.

I haven’t been there since probably 2000 and have no plans of ever going back but I do have friends that go there if they have to. I talk to them after finding out they went there the first question I ask is if thew finally got the movie on the screen and so far have never been told yes.

This was not owned by Carmike. I know because when I was movie closer to the cabin I applied at Carmike at Oakwood Mall and that was in ‘96.

I I was a manager at GCC and when my uncle was there he asked me how his movie ended and told me the story. As a result when I moved closer I wanted the first time to cine 3 as it was called then to be the first showing of the day. It was at least close to being on the screen but I got stuck to the floor because it was so sticky and should have been clean for the first show of the day. When I first started going there I didn’t anything about it to friends I went with until they started saying things about it they I would and point out other problems. I didn’t say anything to friends at first because maybe my standards are to high but they are not. There are basic things any movie theater should be able to do which includes getting the movie on the screen and having the sound work not to mention being clean so your feet don’t get stuck to the floor.

When I was at GC it was like Mike Rogers said we had exchange tickets so they could come back but in my uncles case when he asked for a refund he was told they couldn’t because the money was already deposited.

Well, hopefully you will be happy to know that things have changed at the Lake 7 since the last time you visited the theatre. The movies are always on screen, and if there’s a problem… the customers are always compensated.

And yes… for better or worse, the Lake 7 (Cine 3 at the time) was once owned by Carmike.

Here is the history of the 53 Auto-Vue that preceded the Lake 7 Cinemas at the same location.

Well, apparently the Admins removed the 53 Auto-Vue marquee photo from 1981 I added. Not sure why.

DavidZornig:I have created a page for the 53 Auto-Vue, so you can post your photo there. Thanks for the information.

Cool. Will do. I also originally tried updating the Drive-Ins.com page for the 53 Auto-Vue. If that worked I’ll post a link. I think that was were I got the original car capacity.

P.S., the new page already had the 1981 photo. I just added the photo and history credit source. Drive-Ins.com never updated other than the photo. It would have been the same info anyway.