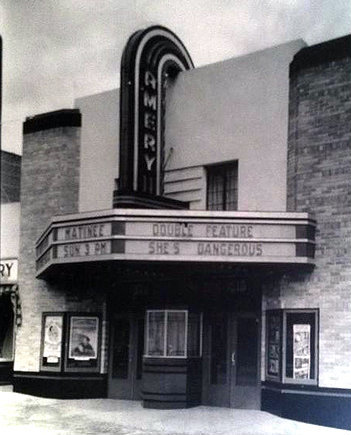 The Amery Theatre was opened December 11, 1936. It is another single screen small town theatre that was in operation until 2012. It operated on a daily basis showing first run attractions.

It has been taken over by new owners and was renovated, reopening as a classic movie theatre on July 4, 2013 with “Singing In the Rain”. It was closed in 2015.

The Amery Theatre closed down, but is being renovated by new owners in hopes that they can reopen it as the Amery Classic Theatre.

The theatre just reopened on July 4 with a screening of “Singing in the Rain.” Check it out on the website listed above.

According to the website, the theater is currently on hiatus while the operators consider options. All activities and presentations have been cancelled.

According to a document about the Amery Classic Theatre from the Amery Area Historical Society (PDF here, the New Amery Theatre opened on December 11, 1936. It had been built for Alfred M. Paulson, who had taken over the town’s earlier theater, the Gem, in 1934.

The building was designed by a local craftsman and self-taught architect, Emil Klinger (the document says Klingler, but other sources all say Klinger) who later established an architectural practice in Eau Claire.

As of this date, the Amery Classic Theatre is still dark, the last events noted on the web site having taken place in 2015.

Looks in decent condition, but have For Sale sign.