Martin Woldson Theater at the Fox 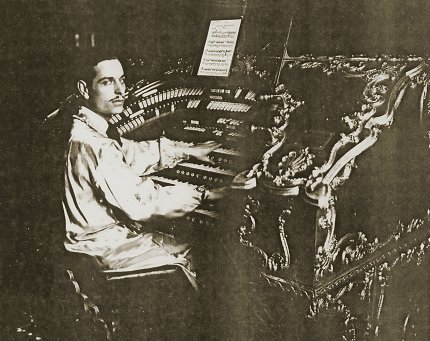 Fox West Coast Theatres opened the Fox Theater in downtown Spokane on September 3, 1931 with the movie “Merely Mary Ann” and 2,300 seats. The theater was designed as an opulent Art Deco style movie palace by architect Robert C. Reamer, who also designed Seattle’s Fifth Avenue Theatre. The architectural firm Whitehouse & Price were associate architects. The theater began with a Wurlitzer from Tacoma’s Colonial Theatre, which in turn departed in 1961, sold to a person in California.

The premiere interior designer of North American movie theatres, Anthony B. Heinsbergen, was employed to ensure an exotic interior. Murals in the lobby show an undersea world transitioning into a forest canopy of dense foliage topped by a giant sunburst ceiling light fixture. On the second floor are fantasy landscapes of castles and clouds. A 45 foot long sunburst chandelier decorates the auditorium ceiling. Radiating outwards from the chandelier is an enormous sunburst, in blues, oranges, greens and metalic golds.

In addition to movies, programming from 1968 until 1975 included the Spokane Symphony. In 1975, the Fox was triplexed and began showing second-run films in 1989. Movie operator Regal put the Fox up for sale in 2000. Preservationists objected to the Spokane Club’s attempt to buy it to demolish to construct a parking garage. Instead the Spokane Symphony sought its own home after performing in the Spokane Opera House and purchased the Fox for $1.2 million. The last movie was “Gladiator” on September 21, 2000. The theater was placed on the National Register of Historic Places in 2001.

A $31 million dollar fundraising campaign was launched for restoration. The state donated $8 million towards that total. EverGreene Painting Studios of New York restored the murals. The Fox Theater had a gala reopening on November 17, 2007, with Tony Bennett singing. In accordance with the sales agreement with the prior owner, Regal Cinemas, movies cannot be screened until at least 2020. Tours are conducted every week.

No, I wish it had been – I remember being bored to tears by the movie. I am sure it was the spring of either 1976 or 1977, although I must have seen the poster at another time – I was still in junior high during the field trip to the movie, and it was shown in a special screening to hoards of junior high kids from the area.

No, I don’t think it was a “general release” but one that was made as an educational history film aimed at teenagers. It was definitely about the Revolutionary War, but it’s not a film I remember has having come out to theatres.

I was just stating general release titles since standard movie theatres only show 35mm and not 16mm which is the regular format for educational films.

Hmmm…You have a point there! I guess it must have been a general release film then. But I’ve no idea which one it was. Definitely not Barry Lyndon, though. But it obviously was good enough to be considered educational enough as far as facts went to hold screenings for school kids in a multitude of districts.

What beautiful Theater! Attended several movies there in the 70’s. Very happy it was restored. These magnificant venues can never be replaced.

Jean Anthony Greif performed and also had a business at the Fox building. His business was called: Northwest Organ and Chimes. He also wrote many songs, including the theme song for the Expo 74. He is my Grandfather and passed away in 1981. http://www.pstos.org/organists/wa/greif.htm

Known as the Martin Woldson Theater at the Fox