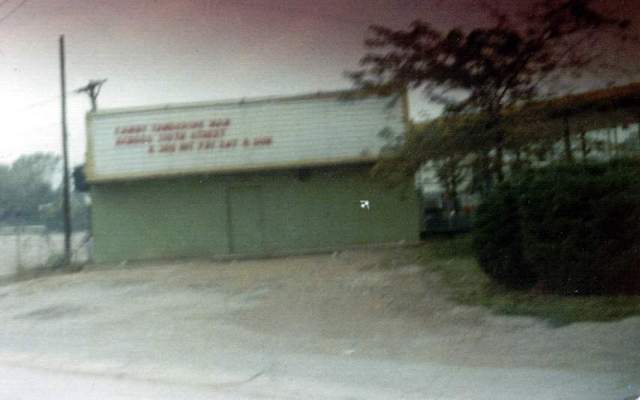 The layout for the Thunderbird Drive-In was strange in that even though the drive-in was on Hamilton Avenue the entrance was actually on Natural Bridge Road. It was located between the popular Goody Goody Restaurant and a liquor store. The entrance stretched a block long before you actually got to the box office.

It was a 450 car drive-in that opened July 3, 1959 with Marilyn Monroe in “Some Like It Hot” & Gary Cooper in “Man of the West”. It was operated by Mid America Theatres. With the changing of the demographics of the neighborhood the Thunderbird Drive-In played kung-fu and “blaxploitation” features toward the end. The theatre closed in October 1977.

Anyway, the FB site has been stripped of its content because the owner did not want to switch to the new “Timeline” format. In the 2 ½ years since your previous comment, the folks on this forum both visited the former page and verified its content before the page was stripped.

I DARE anybody to find 2001 ads in the Thunderbird section!

Great place. The drive up to it seemed narrow and long. I remember almost an entirely African-American audience from 1972-1974.Before that it is vague. I remember the films with black stars—I do not remember what we saw—-Shaft, Superfly, Grier, Buck and the Preacher, …

This area was completely surrounded by a majority African-American community and you could access it from black areas with out passing through non-black areas via Highway 70 to Goodfellow, drive down Natural Bridge from Union or Kingshighway, drive from Kienlen…safe physical access mattered.

It was called “The Bird.”
Being from the city, Thunderbird was a drink, like Rosie O'Grady, Freight Train,or Brass Monkey.

Next door: I liked the Goody Goody Restaurant. I liked Sam the Watermelon man There was a liquor store across the street. I love Skateking in 1970’s 1980’s and 1990’s—-real DJ’s, real mixes, real dancing with couples, Soul Train line on skates, flips and jumps, slow songs, fast songs a real vibrant sycopated dance floor. Fabulous urban line dancing on skates—you name it. Christian nite, old school for elders night and so on. Groups use to travel from Skateking to other rinks around the country—New York, Atlanta, Detroit—-and people use to ask—elsewhere —about Skateking. Tom Casevelli Ford was there on Goodfellow. Old reserve Army Barracks and Small Ammunition plant.

After thunderbird closed,
North Twin was the only drive-in left within range.

Surely some current/former StL resident has a pic of the tall, vertical neon sign of the actual Thunderbird entrance which was located next to Goody Goody.

It’s always been interesting on Cinema Treasures how correct information is integrated into the description with no credit given to the contributor.

All those who contributed info should receive proper credit…even that which was edited years later. JAlex has been a beneficial resource for correcting inaccurate St. Louis area theatre info and should be credited.

Opened with “Some like it hot” and “Man of the west”. Site is now Alberici Constructors.

From the Motion Picture Exhibitor, July 1, 1959: “Construction work is being pushed on the new Thunderbird Drive-In (in St. Louis), which is being built by the Jablonow-Komm Theatres.”

The Thunderbird (finally) debuted in the Motion Picture Almanac in the 1963 edition, capacity 800, owner Louis Jablonow. It stayed that way through 1966, then the MPA didn’t list owners in 1967-76. In 1977, the Thunderbird’s owner was Mid-America Theatres. And even though we have a better closing date, the MPA continued to list the Thunderbird through 1979. Sigh!

12 years after that…”debate” about movie titles at the T-Bird began, the St. Louis area newspapers are now archived online. I have embarked on my own personal tracking of the old St. Louis movie theater listings from the 1970’s and the T-Bird listings under the Mid-America banner show roughly 75% Blaxploitation, 10% Kung-Fu, 10% Horror and a scant 5% mainstream titles (like westerns and such).

I suspect that the memories of those residents that were mentioned before are from the days of traveling to the Airway, St. Ann 4 Screen, Holiday & North Twin to see those big ticket titles. Because none of those played here. And we now have the receipts.