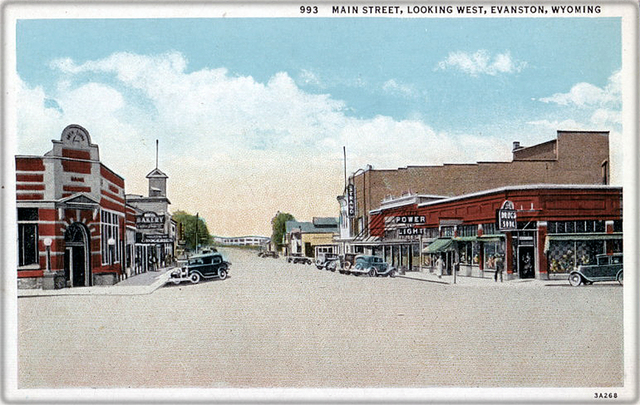 Opened in 1918, the historic Strand Theatre on Evanston’s Main Street originally hosted vaudeville and other live entertainment in addition to motion pictures in its early years.

The Strand Theatre was successfully showing first-run movies, and was part of the Westates Theatres chain when disaster struck on 7th May 2007 when the building was badly damaged by a fire. Renovations were carried out to the plans of architectural firm Myers Anderson Architects, and it reopened in May 2015 as a community events centre.

HEY!Atleast I beat you to the story.(Delete this after reading)

Here is a short article and photo from December 2007 about the resurrection of the Strand:
http://tinyurl.com/2ko46f

Here is an Associated Press story dated 9/29/08. The related sites link at the top of the page is defunct.

EVANSTON, WYOMING – The owners of the historic Strand Theater in Evanston are donating the building to a local agency.

A fire destroyed much of the 90-year-old building in May 2007. In March, the Evanston Urban Renewal Agency made an offer to buy the property from Kim and Kendra West. The deal fell through but the agency now says the Wests are donating the theater.

The agency plans to clean up the theater and stabilize the building. An attempt will then be made to raise money for renovations. One proposal is to renovate the Strand Theater as a performing arts center.

Here is another photo:
http://tinyurl.com/mpell7

The Strand Theatre opened on December 17, 1917, and was designed by architect Frank W. Moore. It was built for Evanston exhibitor Arthur R. Bowen. Information about the Strand is included in a biographical sketch of Mr. Bowen that appears in volume 2 of the S.J. Clarke Publishing Company’s History of Wyoming, published in 1918 (scan from Google Books). Here are the passages relating to the Strand:

“Arthur R. Bowen is well known in theatrical circles, especially in western Wyoming, where for a number of years he has been identified with the Wyoming and Strand theatres, the latter a new venture which in architectural construction and equipment is equal to any theatre to be found in this section of the country. In the conduct of his places of amusement Mr. Bowen has displayed the most enterprising spirit and has kept in touch with the trend of progressiveness along that line.

“In 1917 he began the erection of the Strand theatre which opened December 17, 1917. It was built and equipped at a cost of fifty thousand dollars and is one of the most attractive and modern theatres to be found anywhere in the west. The architect was Frank W. Moore, of Salt Lake City, who is an expert in theatre building and who has combined in the Strand all of the latest conveniences and attractive designs known to the theatrical world. The Strand has a seating capacity of eight hundred, including main floor and balcony, with orchestra space and a large, commodious stage with ample dressing rooms for the use of traveling companies.”The good news is that, though the historic interior of the Strand Theatre was destroyed, the building has been stabilized and will be restored, according to this page from the City of Evanston web site. The page does not say if the building will be reopened as a movie theater or not, but as Evanston has an operating four-screen house (the Cinemajik Valley 4 Cinemas) it seems likely that a restored Strand would have to be used for other purposes.

From Evanston a postcard image of Main Street along with the Strand Theatre.

Like the pheonix it has been reborn after the fire! The Strand has reopened not as a movie theater but as a community event center. It has already hosted it’s first two events, a community plan and a Buddy Holly Tribute concert. Contact the Evanston Urban Renewal Agency for more information.

A few photos of the reopened Strand Theatre can be found on its Facebook page. I don’t know what the interior was like at the time of the 2007 fire, but the designers of the rebuilding, Myers Anderson Architects, have gone with a classic Streamline Modern look. Myers Anderson have designed two other theater renovation projects: the Rock Theatre in Rock Springs, Wyoming, and the Wilson Theatre in Rupert, Idaho.