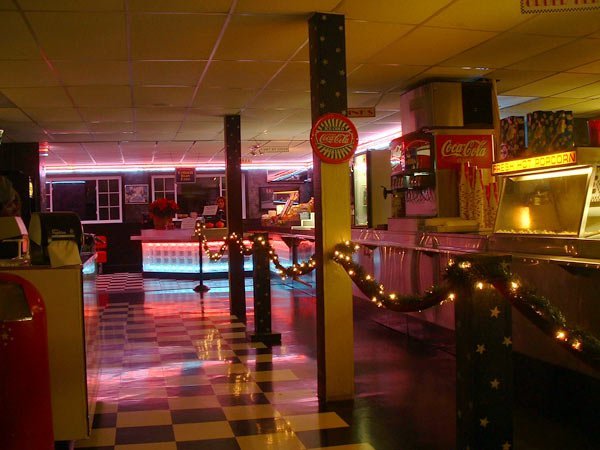 The Bay Drive-In is located in Alexandria Bay, NY. It has two outdoor screens and a small enclosed theater which can seat 60 people. The car capacity is 600. This drive-in opened on June 6, 1968 with Rosalind Russell in “Where Angels Go Trouble Follows!” & The Young Americans in “Young Americans”.

I found it, its an indoor seating area that is open on one side and faces one of the screens. Sunrise Drive-In in Valley Stream had something similar.

Yes but it looks very nice, I cant tell if theres a pane of glass there or its a cutout. http://www.baydrivein.com/History.html

Why is there no listing for the hard top Bay theatre. When I had to go to summer camp with the army we would weekend in Alex Bay. I was wandering around the street once time and came upon this good sized theatre. The doors were wide open. I never actually went back to see a performance if it was open. And I question that because there was a small neon sign which said Bay Theatre and had an arrow which was lying on the floor of the auditorium, leading me to believe the theatre was closed. In hind sight I’m sorry I never checked it out. Who would have thought that forty plus years later I’d find this site on my computer?

Still working on getting the hardtop up – working with the local librarian. Hardtop was on Bethune off Church. Building has been razed and part of the site it a restaurant.

Have they gone digital?

I’ve read in a couple of places online that the present owners, which would be Thomas Wade and family, bought the Bay in 1982. Let’s see what it says in my Motion Picture Almanacs.

The grand opening article in the Thousand Island Sun said that Willard Beach (who had been mayor of Alexandria Bay) was the top stockholder in the corporation that owned the Bay. The 1980-84 MPAs listed W. Beach as the owner. H. Wade took over by the 1986 edition.

According to AmericanTowns.com, the Bay rebuilt the concession stand in 1992, adding a 60-seat indoor viewing area.

Also, the Watertown Daily Times reported that a massive thunderstorm “demolished” the Bay in the wee hours of July 15, 1995. The Wades fixed that within two weeks.

In 2013, the old projection booth was remodeled into a cafe, allowing customers to watch the movie from a “1950s cafe setting.”